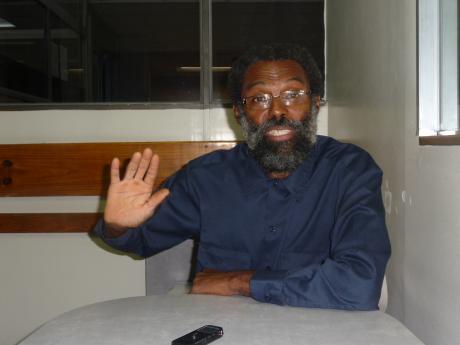 A self-described hermit is plotting a major political avalanche in Eastern Westmoreland, pledging to capture in the region of 15,000 votes in the next general election and send sitting Member of Parliament Luther Buchanan into political oblivion.

Haile Mika'el, who secured 50 votes when he ran for a seat in the Westmoreland Parish Council via the Whitehouse Division in 2012, said he has spent the last few years spreading his message of change in Eastern Westmoreland and feels that it has found favour with the people, who will send him to Parliament to work on their behalf.

Mika'el, however, is attempting to do what is considered impossible. Eastern Westmoreland, once represented by former Prime Minister P.J. Patterson, is considered solid People's National Party (PNP) territory. Buchanan won it by 4,995 votes in 2011, widening the margin from 3,363 in 2007, and almost on par with the 4,789 winning distance last recorded by Patterson in 2002.

Additionally, the PNP has not lost the seat since 1980, when Euphemia Williams upset Patterson in an election that saw the PNP being whipped 51 seats to nine by the Jamaica Labour Party.

That, however, does not bother Mika'el, who observed that the bulk of the people registered to vote in the constituency had chosen not to exercise their franchise.

"People are fed up with the kind of representation they have been getting. I have been disappointed with the performance of the member of parliament," said Mika'el, while adding that even if he does not win the election, he would be satisfied with taking a stance.

"I will be winning a conscience victory because I will be voting for someone very competent to do the job of MP. I have been working the constituency since 2001 when I came there from St Ann, working as a volunteer, and I have been getting a lot of good responses," he said.

"I am saying to the people, 'I am not buying votes. If you are interested [in being bought], tell the next man'," said Mika'el, who also described himself as a volunteer, itinerant physical education teacher at schools in the parish.

"We have to lift up our heads ... . The PNP and the JLP have failed us," said Mika'el, who hails from a community called Piteeny, where he has neither electricity nor running water.

"We have been sitting back and saying we not voting, and have allowed the diehard to capture 30 per cent of the population and win an election while the other 70 per cent sit on the fence and support everything through taxes."

In a statement prepared for a campaign launch held in Darliston recently, Mika'el said he is ready for the job of MP.

"It may seem to some that I have made a stupid decision in offering myself as a candidate for the office of member of parliament for the constituency, but the reality is that I would be a fool if I did not offer myself," he said.

Mika'el said that in 2012, he walked from Belmont to Darliston to hand in his nomination papers. That 24-kilometre journey, according to Google Maps, takes some five hours by foot. He said he will not be going alone for the next election.

"One lady told me that she will walk with me to Darliston the next time I go to hand in my nomination papers," he added.

"If I get one person walking with me to Darliston, I am going to walk back to Belmont. The last time I took a taxi back," he said.

But even if he gets company to walk the journey, Mika'el knows his work is cut out to get ballots into the box. Of the 876,310 votes cast in the 2011 general election, 968 were for third-party and independent candidates.

Under the Representation of the People Act, each candidate must deposit $3,000 on nomination day. The money is returned if the candidate was elected or polled not less than one-eighth of the total number of votes cast at the election, or died before the close of the poll on polling day.