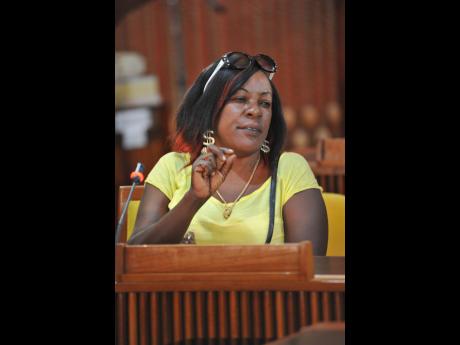 Norman Grindley
Annette Marshall testifies during yesterday's sitting of the West Kingston Commission of Enquiry at the Jamaica Conference Centre in downtown Kingston.

A resident of Tivoli Gardens yesterday gave gripping testimony about how her two sons died inside her blood-soaked apartment two days after the launch of the May 2010 police-military operations in her west Kingston community.

Jane McFarlane told the West Kingston Commission of Enquiry that she spoke with one of her sons, Oshane Lindsay, as he lay wounded with a bullet in his back 10 minutes after her last telephone conversation with his brother, Martin Lindsay.

"'Bout 10 minutes after me done talk to Martin, Oshane call me and me only hear him say 'Lee Lee, [her nickname] Pops [Martin's nickname] dead," she recounted.

"Me call back di number and say... 'who dis' and him say 'Poi' [Oshane's nickname]. Then him say 'Lee Lee, me get a shot inna me back and Pops dead, Pops dead pan the step," the mother of seven continued.

She said her wounded son told her "me feel like me ago dead", before revealing that he and his brother were shot by members of the Jamaica Constabulary Force (JCF).

According to her, a post-mortem revealed that Martin died from "a bullet to his chest and a next bullet to one of his arm".

According to Marshall, this happened after she overheard a policeman asking his colleague if she "call the vehicle yet fi come fi dem three dead man deh."

"I hear the truck coming down [the street] so I went upstairs [her home], ease weh di curtain 'cause I want to see who was these bodies coming out. First, I could make out a man that I don't know. Then when a look again I see dem take out a body without head," Marshall recounted.

"The third body, him full a gunshot hole and bloody," she added.

"You recognise that third body?" asked senior legal counsel to the commission Garth McBean, as he led her through her evidence.

"That was Jane McFarlane's son ... is Lindsay is him last name, but we call him Pops," she testified.

McFarlane testified that two days later she was allowed into her home, located on Wilton Hill Drive, and said what she saw reminded her of a slaughter house.

"Mi mother used to do butchering work ... ; it remind me of when mi used to go slaughter house. It didn't look like the house I was living in," she said.

She told the commission that she subsequently found more than 10 spent shells inside her home, which she has since turned them over to the Office of the Public Defender.

The three-member commission probing the conduct of the operations that were aimed at capturing drug kingpin Christopher 'Dudus' Coke also saw photographs showing large pools of blood in sections of the house.

"This is very distressing," said commission chairman Sir David Simmons, as McFarlane wrapped up her testimony.

McFarlane testified that as tensions began mounting in sections of west Kingston after then Prime Minister Bruce Golding announced that he had given the green light for Coke's extradition to the United States, she went to Tivoli Gardens to pick up her seven children and take them to safety at her other home.

McFarlane said she blamed herself for Oshane's death, pointing out that when he told her he had been shot, she called the police and requested that they send someone to assist him.

"Me keep asking me self, did I betray him? ...why I say that? Oshane was alive and I ask for help for Oshane and the help that I get is a next dead body," she testified.

"Inna my self I feel - and this always get me emotional - like if I didn't send them to help him, he would still be alive," she insisted.

McFarlane will face cross-examination when the hearings resume today.