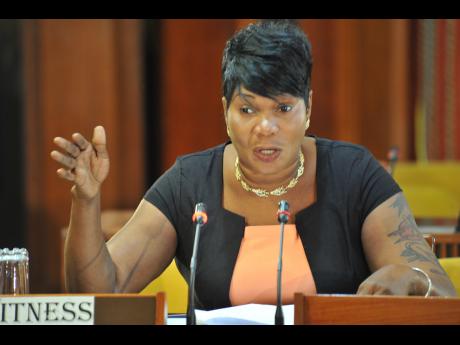 TIVOLI GARDENS resident Jane McFarlane has revealed that two of her children remain traumatised by their ordeal during the May 2010 police-military operations in their west Kingston community.

McFarlane, who was testifying before the West Kingston Commission of Enquiry, said her children, Tamara and Omari Lindsay, have been grappling with the deaths of their brother, Martin Lindsay, and cousin, Oshane Lindsay, during the operations.

She also testified that the father of Tamara's child was among the more than 70 civilians who died in the operations aimed at capturing drug kingpin Christopher 'Dudus' Coke.

"Omari did tek a longer while to come around ... he had to be admitted to Bellevue Hospital for a period of time," McFarlane said in response to a question from counsel to the commission Simone Mayhew.

"Tamara, even last week, she had like a nervous breakdown again. Whenever you ask them questions about it [the operation], it always impact them," she added.

McFarlane testified on Thursday that Martin and Oshane - her son and nephew, respectively - were killed inside her blood-soaked apartment two days after members of the security forces entered Coke's Tivoli Gardens stronghold on May 24, 2010.

She said Oshane told her during a telephone conversation before he died that Martin was dead and that he had a gunshot wound to the back and claimed that they were shot by members of the Jamaica Constabulary Force (JCF).

Yesterday, McFarlane conceded that a statement she gave almost seven weeks after the start of the operation had not included claims that Oshane told her that he and Martin were shot by police personnel inside her apartment.

The concession came after she was confronted during cross-examination with two witness statements she signed on July 1, 2010, and August 12 that same year.

McFarlane acknowledged that the claim was instead included in the second statement.

During a sometimes-testy cross-examination by attorney-at-law Valerie Neita-Robertson, who is representing the JCF, McFarlane insisted that she was being truthful.

"Just imagine you inna my shoe. You have two children need medical help 'cause dem in a state of a nervous breakdown. Me have a little boy, three years old, a suffer from meningitis at the time. Me have two dead. Me not even get fi see dem body yet. You think me could a remember everything stage by stage," she shot back at Neita-Robertson.

"It a go tek me time when me lay down after fi remember a little bit and a little bit. So the little bits dem wha me leave out, even if me miss dem out inna di statement, they were there, but dem never come clear, cause me a go through a lot at the time," she added.

"And the fact that Oshane had told you that the police had shot Martin, and shot him was important ... it was vital?" the JCF attorney quickly countered.

"Yes, we know it important... you never lose anybody who dead in something like this, enuh. You never inna my shoes, enuh," McFarlane responded.

"Madam, I empathise with you, but I am saying, had Oshane told you on the telephone what you said he told you, you would have remembered," Neita-Robertson continued.

"Yes, he told me ... but me a go through a stage weh me head no clear. Me couldn't remember until when things a get little clearer," she insisted.