Private security spike in the past five years 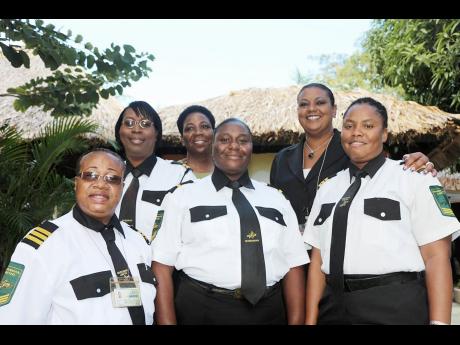 Contributed
Denise Sangster (second right), customer relations manager, Marksman Limited, joins a group of female security guards who were treated to a luncheon by Guardsman and Marksman for the 2015 celebration of International Women’s Day.

Jamaica's high crime rate has fuelled an estimated 50 per cent increase in the number of security firms operating locally over the last few years, but the spike in criminal activities is not good news to the operators of these entities.

"It's a two-edged sword because the numbers are growing in terms of the industry, but at the same time, all of us have to operate in an environment which we don't find the most conducive," said executive director of the Private Security Regulation Authority (PSRA), Rosalyn Campbell.

"You will find that companies go out because it is not viable for them, and so some will go and some will come," added Campbell.

According to the most recent Economic and Social Survey, there were 328 registered private security companies islandwide with a combined total of 21,551 security guards employed at the end of last year.

But co-managing director of the Guardsman Group, Vinay Walia, says several of these companies have no choice but to close their doors shortly after being open, because of the financial challenges being faced by Jamaicans today.

"Everybody thinks that because crime is high in Jamaica this industry is recession-proof, but that is not true. Actually, for this industry to survive, we want the economy to be doing well, not crime going up.

"People with the misconception and wrong perception, they usually end up jumping into this industry without understanding the logistics of it and what it takes to run a security industry," Walia told The Sunday Gleaner.

He said that despite having a faithful clientele and almost 40 years in the industry, even larger security firms such as Guardsman are challenged, given the current economic climate as many people who need security services are not able to pay for it.

"It is tough, it is very tough and it puts pressure on us on all sides, because we have to work with people's affordability and sometimes they are not able to afford what they really need in terms of security," he said.

Deryck Dwyer, who is the owner and sole employee at Global Integrity Services Limited, says he has been finding it difficult to keep his business running because people are unable to afford the price for the polygraph services his company offers.

"Unfortunately, the dollar keeps moving and, consequently, our price (quoted in United States dollars) would keep

moving, but in many instances I have had to reduce our cost, or just simply quote a Jamaica dollar value rather than what would have been my true value for the service in order to remain competitive and in order to satisfy my clients."

Dwyer's company is one of several which only have one individual registered by the PSRA as a security guard. He has decided against hiring anyone else in order to ensure his business remains viable.

"It is not a business for the faint of heart. It has serious ups and down," he said.

A private security company would have to satisfy varying requirements under the PSRA in order to be licensed for operation. This includes a certification of incorporation of the company, a current Tax Compliance Certificate, a photograph and written description of the uniform. The company would also need to have an inspection conducted by the police and inspectors of the PSRA of its premises, among other things.

Campbell said that she finds that it's the clients who are sometimes now dictating the cost for the services offered by security firms, and this affects the profit margins of these companies.

"What you find is that most of - for want of a better expression - the traditional or the long-term players, they find that their competition comes from their clients, who would say to them, 'I know what the minimum wage is that you have to pay your guards, this is the amount that I am going to give you'. In other words, they are dictating to them a profit margin," she explained.

In some cases, individuals from the more traditional security firms leave to form their own company, compete against their former bosses, and create even more competition.

But despite the rapid expansion of the industry, Campbell said there are no plans to establish a quota, and this stance has been supported by several players in the sector.

"I think that anybody should be allowed into the area, granted that they are bringing value to the service. New players can bring new ideas and new ways of doing things that might not have been in place before," said Craig Clarke, assistant financial controller of Alpha Security Services.