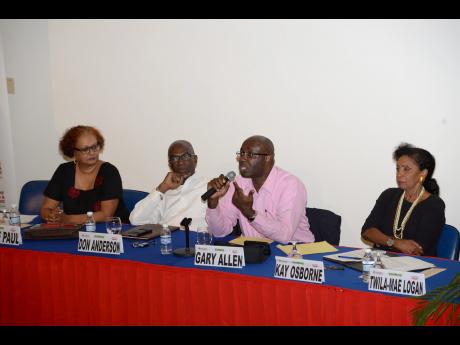 Media representatives and academics agree that the proposed Gleaner-RJR merger will be good for Jamaica.

At the same time, managing director of the RJR Communications Group, Gary Allen, is warning of the inherent danger of a delay in wrapping up the merger exercise.

Allen and others were speaking last Thursday during the latest Public Advocacy Series of the Mona School of Business and Management on the Mona campus of the University of the West Indies.

The theme was 'The RJR-Gleaner Merger: Implications for the Media Business in Jamaica'.

The RJR managing director has likened the merger-acquisition exercise to a 110m sprint hurdles, pointing to a brilliant start and hoping that none of the remaining hurdles will be hit.

He said the level of dynamism in the Jamaican media landscape dictated that the merger acquisition be concluded in the aggressive November to December 2015 timeline, lest Jamaica lose out.

"So many things are happening in the marketplace that delay is going to mean too much difficulty for us to recover from. It is good for a strong, Jamaican-owned media to be here to survive and expand and export the content that we speak about in our creative industries. We want to get there to do that, but delay can be a major problem," Allen warned.

Other presenters agreed about the rapid change in the media. Pollster Don Anderson highlighted a scenario of declining radio audiences, noting that the estimated total radio sets are down from 2.1 million 14 years ago to about 1.4 million today.

Anderson pointed to the rapid growth of Internet audiences along with phenomenal smartphone penetration. He said the Jamaican audience is increasingly looking to these sources for media content.

Anderson feels that with The Gleaner and RJR joining forces, it means they can

leverage each other's strengths while chart a course in a new direction to take advantage of developments.

Anderson was joined in his assessment by management and communications consultant, Kay Osborne.

Osborne warned that the entry of telecoms companies such as Digicel and FLOW represent a clear and present danger to the viability of traditional media.

She said the aggression of their entry and the novelty of their offerings will fast present a drain on revenue from a static advertising pie and changing audience profiles.

Academic and noted blogger Annie Paul also warned of the threat posed by telecoms companies. She said the merger acquisition represented a good prescription for what ailed the Jamaican media landscape.

At the same time, Paul wants the proposed merged entities to use available resources in countering the growing strength of telecoms companies and new media.

"There is a glaring need for solid investigative journalism that no one is better equipped to provide" than the merged entity, she said, adding that "this will mean investing more money and resources in this area, but there is no other option. The new disrupters are at a disadvantage in not having newsrooms, per se. The new entity should capitalise on this."

Lecturer in finance at the Mona School of Business and Management, Dr Twila-Mae Logan, endorsed the proposed deal.

She traced the share-price appreciation of both companies, noting that they have more than doubled since January with a post-announcement spike and subsequent correction. She said if the scheme of arrangement went through, shareholders should continue to benefit with even better prospects for Gleaner shareholders who retain ownership of stocks in the proposed 1834 Limited that will be listed separately from the merged entity. She cautioned management to seize the chance offered by the proposed merger, noting that a lot rode on it.

"This looks real good for the shareholders at this point in time. The rest now is how management takes advantage (of what is before them), the synergies that can be derived from using each other's assets to really not disappoint shareholders," Logan said.

Fielding questions, Allen admitted there would be staff cuts.

He said, however, that the merged entity would be looking to consolidate and then expand, noting that management would be deliberate and strategic in their actions and not cut staff just for the sake of cutting.

"We are going to assess those people who are trainable (or) retrainable, have aptitude in areas that we're looking to extend the business, and those persons we will continue with so that we can minimise the level of cuts that one would do in this operation. You have to think about doing it smartly. You don't have a lot of money just to pay redundancies then find another set of money to hire skills that you had at one point that you sent home with a cheque and now you want them to come back," Allen outlined.

News broke of the Gleaner-RJR merger in early August.

Both companies simultaneously made the announcement to staff, having first informed the Jamaica Stock Exchange. Over the next two months, at least, the deal will be examined by regulators, including the Broadcast Commission, the Jamaica Stock Exchange and the Financial Services Commission. The scheme of arrangement will also have to pass the scrutiny of auditors, shareholders and the courts.