'I am back' - Kern Spencer ready to head back to North East St Elizabeth if PNP rejects Pryce, Redman 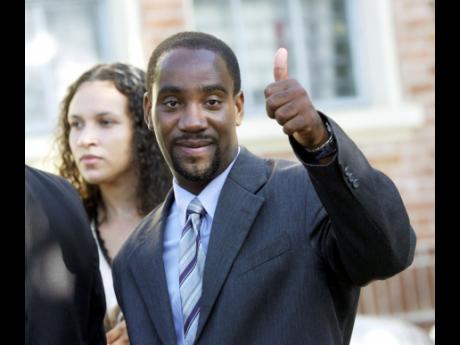 File
Kern Spencer: With my situation, I was now being put up as the sacrificial lamb, the one who was expected to die for the sins of politicians from the beginning of Jamaica’s Independence.

Kern Spencer has revealed that he is considering a return to representational politics, a career path he abandoned after he was charged with corruption and money laundering in 2008 but subsequently cleared.

Spencer told The Gleaner yesterday that he has already written to People's National Party (PNP) General Secretary Paul Burke indicating that "I am back" to do political work, having taken a year off.

Considered to have been a bright politician in the making, Spencer's light quickly went out following his arrest, and despite his acquittal in court, the ghost of the Cuban light-bulb programme lingers .

"I am rested and ready to deface any ghost or duppy of my past. And it is not even about representation but more about setting the record straight. I am aware that there are those who don't want the record to be set straight," he said.

Spencer's declaration of intent to re-enter the political arena comes in light of bitter infighting between incumbent Raymond Pryce and aspirant Evon Redman.

Spencer served the constituency as MP between 2007 and 2011, during which time he was dragged before the court for allegedly using his companies to funnel money out of the light-bulb programme.

Yesterday, Spencer said it is "time for truth and reconciliation from every single political leader", even as he maintained his innocence and dismissed suggestions that it was a technicality that caused him to escape prison.

"Over the past six years, my life in every shape and form was dug up [by] every investigative arm of the government, and at the end of the day I was found to be clear. I have already faced the music.

"I believe that I was a victim of the political system over the years where persons see the system as being corrupt and I think that I was being sacrificed. I was being asked to be the sacrificial lamb for all the alleged sins of politicians over decades," Spencer told The Gleaner yesterday.

"Persons are sceptical about politicians and are always saying a lot of negative things, and I think that it was perhaps not about Kern Spencer but people were so upset with the process over the years and that somebody must pay for it. With my situation, I was now being put up as the sacrificial lamb, the one who was expected to die for the sins of politicians from the beginning of Jamaica's Independence," he added.

Spencer yesterday told The Gleaner he would consider offering himself if "an instruction is handed down that none of the two should go forward".

He admitted, however, that repairing his image may not be easy and said he felt there were many within political circles that would rather his career not be resurrected.

"I am not a political dunce. I know that as a young person there are persons with political ambitions and there are those who would want me to remain guilty in the minds of people for their own political advancement," Spencer said.

Pryce, the sitting North East St Elizabeth MP, has been accused of non-performance by challenger Redman, but the party has been unable to hold a selection conference in the constituency to decide who should go forward.

Sensing that there is the need to unite forces in the constituency, Spencer told The Gleaner yesterday that he is not ruling himself out of the process, noting that he has begun his return to active politics by assuming the role of secretary of the Santa Cruz division.

"There is no secret that there have been very loud calls for my return to representational politics to represent the constituency of North East St Elizabeth. There is no denying that there is a love affair between myself and the people," said Spencer, a former junior energy minister.

He told The Gleaner that if the party decides to dump Pryce and Redman and conducts a poll in the constituency, it would show that he has a high favourability rating.

Questioned about whether he would be baggage for the PNP, which created an integrity commission to vet candidates, Spencer said he feels loved whenever he travels throughout Jamaica.

"Unless persons are being hypocritical to me, but when I go around Jamaica I am embraced," Spencer said, while adding that much of the love is a result of his media business which focuses on giving exposure to local entertainers.

Spencer's political strides were cut short by his arrest in February 2008 after the auditor general reported that about 176,380 of four million bulbs, costing approximately $92 million under the Cuban light bulb programme, could not be accounted for.

But after six years before the court, he was acquitted when the judge upheld a no-case submission made on his behalf.

"As a young man, I have gone through the experience and I would hope that no other Jamaican is charged with any matter whatsoever. Almost anybody can be charged. Anybody can go to the police station or the relevant authorities with an accusation, but there is a wide gap between being charged and being convicted," the hopeful comeback kid said.

Spencer recalled that he was cleared along with portfolio minister Phillip Paulwell of any criminal involvement by the party following a report which was submitted to then General Secretary Donald Buchanan.

"Six years after the court of the land upheld a no-case submission, which in effect meant the case should not even have been in the court. I maintain my innocence from that first report that I gave to Donald Buchanan. When persons were worried and troubled about the case I said to myself that if the justice system in Jamaica is fair, and I believe it to be fair, then I would not have any problems," Spencer said.

Pryce was placed in North East St Elizabeth on the eve of the 2011 general elections after the party decided it would not allow Basil Waite to represent it in that election.

Waite ventured into the constituency at the height of Spencer's trial but was not found suitable to be a candidate.

North East St Elizabeth has had four MPs, all members of the PNP, during the last 20 years.

Spencer said he has a role to play in the unification of the party going forward, and has warned the party hierarchy not to think about fixing the current problem by inserting a candidate.

"That is not going to fix it. What is needed is for the structure of the constituency to be up and running," Spencer said.