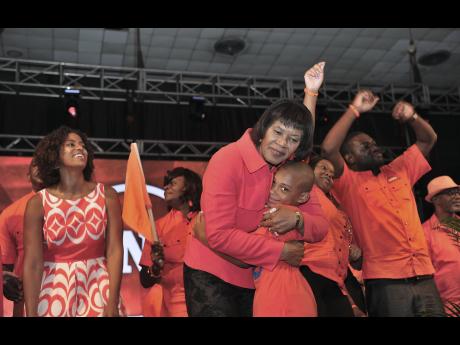 Norman Grindley
Prime Minister Portia Simpson Miller, the president of the People's National Party, hugs a child on the platform of the party's conference at the National Arena yesterday. One of the central themes of the prime minister's presentation was the protection of children from abuse.

Justice Minister Mark Golding said yesterday that bills have already been drafted to amend the Childcare and Protection Act and the Sexual Offences Act to increase the penalties for people who abuse children.

Prime Minister Portia Simpson Miller, speaking at the People's National Party's (PNP) 77th annual conference at the National Arena, labelled as "demons" people who are abusing children and warned that the law was being strengthened to ensure stiffer penalties are meted out.

"I don't care who you are, stop it. Don't do it. I am going to see you in prison. I am going to come to court and look in your faces," the prime minister and PNP president told an overflowing arena of orange-clad Comrades.

"I am going to ensure the full weight of the law, protecting the Jamaican children," Simpson Miller added.

The prime minister's comments yesterday mirror similar ones she made during her contribution to the 2015-2016 Budget Debate in March. Then, she said the nation must stand against the horrific violence being waged against its children.

"Our children are being raped, murdered, stabbed, scarred and shamed," she said in Parliament, noting that research has shown that one in every five females 15-19 years old and sexually active has reported being forced to have sex.

Betty-Ann Blaine, an advocate for children, said if the Government is to be believed, it must move beyond talk and show greater action in dealing with child abuse.

"Talk is cheap. I am not sure if the prime minister is just pandering to the crowd, if she is speaking what is politically correct and the things people want to hear. We know people love children, and when you talk about children, you get people's attention," Blaine said.

She added: "I am disappointed that since the Budget Debate, we have not seen any real evidence that any of the legislation is being strengthened to protect our children. It would be interesting to know if there have been more prosecutions or if there have been more investigations of the abuses of our children. What we do know is growing and growing exponentially are the abuses against children, even buggery."

Some 180 children have been murdered in Jamaica since 2011, with 42 murdered this year, as at August 22, according to police data.

A strident Simpson Miller said yesterday that every Jamaican must "stand united, vigilant and resolute against child abuse, whether it is physical abuse, sexual abuse or emotional abuse.

Simpson Miller said children should be able to maintain the innocence of their childhood years and live in safety.

"We must stop the rape of our children. We must end the murder of our children, and if you want to be vex, [then] vex with me, [because] I pushed for it. ... I have asked for the laws to be amended to hold parents accountable when they neglect their children," Simpson Miller said.

She added: "Those who feel it is nice and sexy to rape the child, you better stop it now. I am going to see that you get the full penalty of the law in this country if you rape a child."

Golding told The Gleaner yesterday that Cabinet took a decision for a toughening of some penalties relating to violence against children.

"Those amendments have been drafted now, and once we are comfortable with them, they will go to legislation committee and then to Cabinet for approval to be tabled," Golding said.

"I don't want to put a timeline on it, because we have a lot of stuff dealing with in terms of legislation committee, but it is at an advanced stage," the minister added.