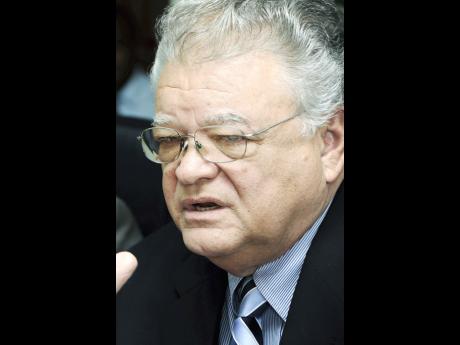 Karl Samuda, a senior member of the Opposition Jamaica Labour Party (JLP), said yesterday that there is need for a political ombudsman to intervene in an Internet domain warfare involving both political parties.

Bishop Herro Blair resigned in June 2013 as political ombudsman in light of questions about the relevance of the office, and despite a commitment from Phillip Paulwell, leader of government business in the House of Representatives, that a new ombudsman would be appointed, the office remains vacant.

Samuda said yesterday that the domain name firestorm that has erupted underscores the need for someone in the office to defuse political tensions.

"I think this is a role for the political ombudsman. If you are going to try to spite an entire party, which has gone to the trouble of creating a brand, indeed From Poverty to Prosperity has become our brand, in much the same way that Up Front and Close could have been considered a brand ... ," Samuda said yesterday.

People's National Party (PNP) member Donovan Nelson, who is the communications adviser to finance minister Dr Peter Phillips, has registered the term www.FromPovertytoProsperity.com as a domain name, which led the JLP to register www.portiasimpsonmiller.com as a domain name that directs traffic to its website.

Nelson told The Gleaner that he decided to register the FromPovertytoProsperity domain in order to provide information to people about the economy.

"I intend to use it to put out information that could be useful for the Jamaican people to know," said Nelson.

He said that he decided to register the domain name in his capacity as a "politically active citizen of Jamaica who supports the governing party".

"They cannot lay any claim to the phrase From Poverty to Prosperity.

"The name became available, and based on the argument that one of our own has put out there, we bought it, based on what one of our representatives has been maintaining, that Poverty to Prosperity is a name that he started many, many years ago and that the JLP took hold of it and is claiming it as their own, and it is not their own," Nelson said.

Samuda said, "It is very disappointing to see that we have reduced the political activity to that kind of action and it is nothing short of intellectual piracy."

The flames of battle are being fanned by North West St Ann Member of Parliament and PNP member Dr Dayton Campbell's insistence that he has been using the slogan Poverty to Prosperity and that it has been copied by Andrew Holness, the leader of the Opposition.

Campbell said he does not intend to stop using the phrase.

"I am not stopping," Campbell said, while adding that he had been using the term since 2013.

"When I presented in Parliament May 6, 2014, I used as my slogan 'Charting the Course from Poverty to Prosperity'. Holness presented on my birthday this year and used it. They have been saying Bruce Golding used it in a Teacher's Day speech in 2011, but several persons used it before that in the body of a speech," Campbell said.

"When I used it as a slogan, I was saying to people coming from where I am coming from that you are starting at poverty, but you are not finishing there. Our journey and our mission is from poverty to prosperity," he added.

Samuda said yesterday that the PNP should engage his party in negotiations with a view to having both sides give up the domain names they have registered.

"This kind of intellectual piracy is something that I am vehemently opposed to ... . I am not declaring that I am opposed to the retaliatory action of the JLP. I am more opposed and quite disappointed that someone would wish to purchase FromPovertytoProsperity.com when, in fact, it has been associated with the Jamaica Labour Party leadership since 2011 when Bruce Golding used it," Samuda said.

Nelson registered www.FromPovertytoProsperity.com on August 24, and the JLP retaliated by registering www.portiasimpsonmiller.com on Monday.

"The retaliatory action is predictable. Coming out of it, I hope there can be some mutual understanding. In much the same way that we set out guidelines in terms of how we should campaign and what constitutes the kind of modern thinking in political campaigning," Samuda said.

Julian Robinson, a deputy general secretary for the PNP, argued that the two cases cannot be compared. He said that the registration and use of www.portiasimpsonmiller.com is not only improper because Simpson Miller is the prime minister of Jamaica and president of the PNP, but it also directs traffic to the JLP's website.

Conversely, he notes that the www.FromPovertytoProsperity.com is not linked to any website. He said, too, that while Nelson is a member of the PNP, it is not an action that is sanctioned by the PNP.