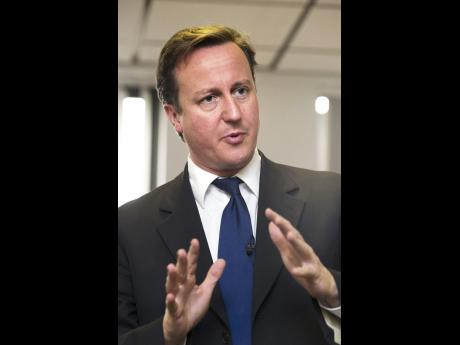 The Jamaican Government is currently making plans for the official visit of British Prime Minister David Cameron next week.

As part of his visit, Cameron is expected to make a presentation to a joint sitting of the Houses of Parliament at Gordon House on Wednesday.

Government officials are tight-lipped about the visit of the British prime minister, but a well-placed government source told The Gleaner that final plans are being put in place to host the UK leader.

Cameron's Conservative party romped to victory in the May national polls in the United Kingdom.

It is believed that while in the island, the British prime minister will revisit the issue of seeking to get Jamaicans incarcerated in Britain to serve their sentences in Jamaica.

The Daily Mail reported in 2014 that the Ministry of Justice in the United Kingdom had made repeated attempts at trying to persuade successive Jamaican governments to allow more than 700 prisoners at the time to be returned to the island to serve sentences for crimes committed in the UK.

Taxpayers in Britain have had to dole out approximately £27 million annually to look after Jamaicans jailed in that country.

The Daily Mail reported that Jamaica and the UK had signed a voluntary agreement to allow prisoner transfers in 2007 but noted that to date, it has not been ratified by Jamaican lawmakers.

Jamaicans make up the third-largest proportion of nationalities in UK prisons after Polish and Irish inmates.

Last month, National Security Minister Peter Bunting announced that the Government was looking to build a new maximum-security facility in the next three to five years that could cost $10 billion.

In 2013, Cameron announced that UK taxpayers were to finance a major prison-building programme in poor countries such as Nigeria and Jamaica because no prisoners would choose to go to prisons outside of the UK, where conditions are worse than in British prisons.

The British prime minister was purported to have said: "When people are sent to prison in the UK, we should do everything we can to make sure that if they're foreign nationals, they are sent back to their country to serve their sentence ... ."

Cameron is also expected to hold talks with Jamaican Government officials on a raft of UK government initiatives to reform the police force, provide assistance to transform violent-prone inner-city communities, and finance initiatives to rehabilitate and reintegrate offenders into society.

In early April, President of the United States Barack Obama visited Jamaica and met with Prime Minister Portia Simpson Miller and members of her Cabinet. The US president also met with CARICOM heads of state during his brief visit to the island.

Venezuelan President Nicolas Maduro visited the island earlier this month for a two-day summit to mark the 10th anniversary of the signing of the PetroCaribe energy agreement.

Yesterday, a senior member of the Opposition Jamaica Labour Party (JLP) questioned the timing of Cameron's visit, noting that it could either be a coincidence or planned ahead of the country's preparations for what is expected to be national polls.

The JLP source warned against any move by the Government to politicise the visit of the British prime minister, noting that the Portia Simpson Miller-led administration used the Obama visit to score political points.