'A tedious competition, but I liked it' - Jadaque 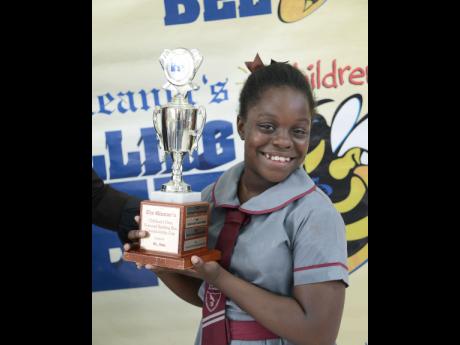 Quote: "I'm really happy because I studied to show myself approved, as the Bible says, and I know that hard work pays success. It was a tedious competition, but I liked it."

To the other parish finalists: "You guys need to watch out for me because I'm going to be a lot difficult [to beat], so study hard. I'm coming to win!"

co-worker called this the trinity, since it's our third-straight win. Hard work does bring success. It was tedious at times - long days, long nights, weekends - but study to show thyself approved, and that's what my spellers did, and she came out on top."

Green on preparation for nationals: "I am really thankful to The Gleaner for having seminars to get the coaches well prepared, because at first, I felt like

fish out of water, but now I am prepared. I know what to do."

I have to say God is good - Daniel
Grandma helped Kesean to prepare for Spelling Bee
She knew other spellers were after her title, so Rhonoya she worked harder
Glenmuir's Hines tops 2017 Spelling Bee
Word-for-word showdown of the Bees