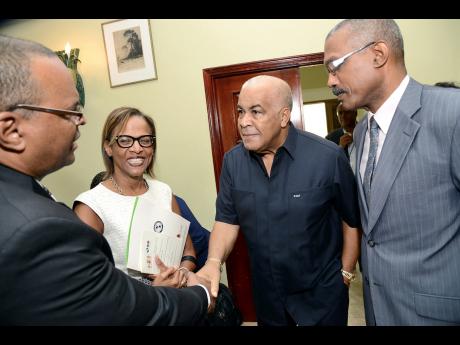 Jamaica is to benefit from a US$20-million pilot climate-change adaptation programme to be funded mainly by the Inter-American Development Bank (IDB), which will be implemented by the Ministry of Land, Water, Environment and Climate Change, working with selected, allied state agencies and non-government organisations.

The overall objective is to increase Jamaica's resilience to climate change, by enhancing the country's adaptive capacity across the priority sectors of water, health, tourism, coastal resources and human settlement. It will be financed by a loan of US$10 million, at interest rate of 0.025 per cent per annum, and a grant of US$7.89 million from the Climate Investment Fund through the IDB, with counterpart financing of US$1.97 million from the Jamaican Government.

Therese Turner-Jones, the IDB's country representative for Jamaica, used yesterday's official launch to emphasise the need for getting everyone up to speed about the harsh reality of climate change and the need for such interventions.

"Increasing the awareness of citizens - every child, every young person in Jamaica about how serious this is because I don't think the problem is going away," she told the audience at the Hotel Four Seasons in St Andrew.

"It's really important that everybody understands that this is a problem that's going to be with the world for a very long time. So the earlier we can educate our children about it, climate change and also the negative impacts and what we can do as a country, things will be better off years from now."

Turner-Jones explained that the IDB does many pilot projects in Jamaica, which are then replicated in the region, and with its next five-year country plan for Jamaica now in the making, climate change will be a crosscutting theme in many of the development projects regarding water, sanitation and agriculture.

Meanwhile, Claire Bernard, deputy director, sustainable development, at the Private Sector Organisation of Jamaica (PSOJ) appealed to stakeholders to treat the project with the urgency and priority it deserves.

"I share the experience of working with a number of agencies which seem to treat funded projects as an appendage whose needs are addressed when there is a slack in the normal work. The result of this is that projects are perennially underspending and behind schedule. The intended benefits are delayed or compromised, effectiveness is impaired, cost increases, and there are implications for the national budget."

The senior PIOJ executive went on to stress the importance of getting the project implemented on time and within the original budget.

"Being a pilot beneficiary in this facility puts Jamaica under the microscope with respect to our performance and consistency ..., the extent to which we scale up good practices, the innovativeness of our activities and capacity for others to learn from them but most importantly, the sustainability of the intervention."