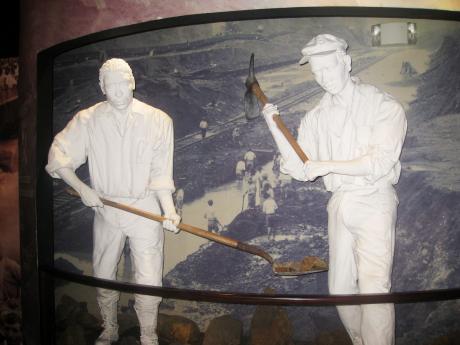 Mel Cooke, Photographer An image of two men working to build the Panama Canal, displayed inside the multi-level museum at the Miraflores Lock at the canal. 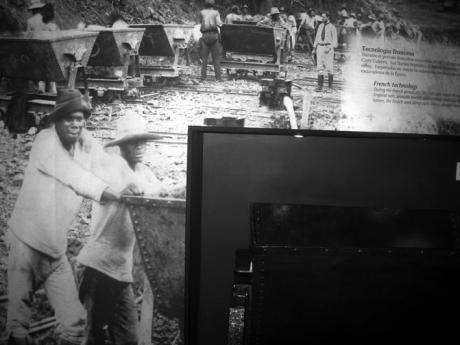 Mel Cooke, Photographer One of the images of persons working to build the Panama Canal, displayed inside the multi-level museum at the Miraflores Lock at the canal.
1
2

(SIDEBAR FOR THIS PAGE)

The multi-level museum at the Miraflores Lock of the Panama Canal in Panama, Central America, provides a comprehensive overview of the cross-country waterway's creation, operation and significance to the country and maritime trade.

However, while Jamaicans played a big role in the construction of the canal, the island's presence, and that of the rest of the Caribbean, in the museum is disproportionate to its impact.

In a display with the titled 'Canal Heroes', Jamaica is mentioned among the many nations which contributed to workers to building the canal.

It is these people who did the intense manual labour required for the construction. After the Europeans and Chinese found the conditions too gruelling, the former especially affected by the heat, Jamaicans and other Caribbean nationals were sought in number because of their ability to manage the conditions.

Construction of the canal exacted a high human toll, with 45,000 persons dying when the French handled the project and a further 46,000 before the United States finished the Canal.

Two near life-size figures doing construction work in that phase of the canal work and, in current operation, two men in a rowboat tossing a line up to a ship to be attached for going through the canal are two of the artefacts depicting black people in the museum.

From a chain being part of the initial design, to be used to stop military ships from using the canal (it was never needed) to a simulator of the ship's bridge view of going through the Panama Canal, the museum is filled with easily accessed information about the man-made waterway.

The natural environment is not left out, one level having some of the fish which populates the area displayed in separate tanks.

And while the canal is naturally the museum's focus, the spin-off industries it facilitates, including the free zone, banking and insurance services are also highlighted.