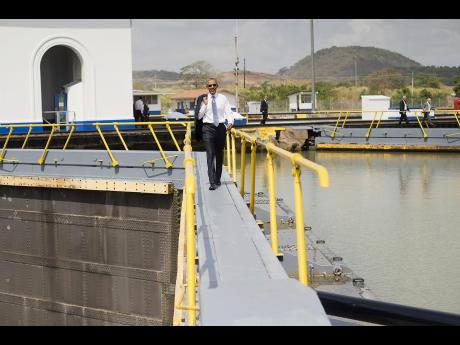 File
United States President Barack Obama walks across the Miraflores Locks during a tour at the Panama Canal in Panama City. 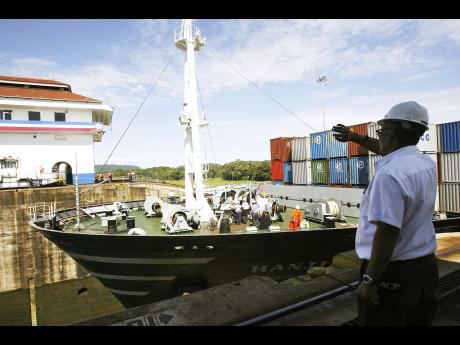 File
A worker gives orders during the crossing of a container ship by Gatun Locks near Colon at Panama's canal,
1
2

While Jamaica continues its slow march to establish a logistics hub, the Panamanian government is moving quickly with its US$5.2 billion expansion of the Panama Canal with an August 2016 projected completion date. Recently, our reporter Mel Cooke visited the Canal and filed this report.

Sitting in a bus and listening to the guide en route to a first-hand look at the Pacific Ocean end of the Panama Canal, it sounds as if there is a Panama BC (Before Canal) and a Panama AD (After Domination, with the handover to Panamanian control in 1999).

At the canal, standing well within the yellow safety lines at Miraflores Locks and listening to another guide outline plans to add a third lane to the two already providing a shipping shortcut between oceans across the Central American nation, it is clear that the expansion is critical to the country's future.

Critical to the revenue increase which the expansion is expected to stimulate is China, already the second-highest user of the 101-year-old Panama Canal behind the United States. Following them are Chile and Japan. While the Panama Canal handles five per cent of all world commercial shipments, 10 to 12 per cent of America's commerce uses it.

The third lane is expected to be opened for business in August 2016, this at a time when Jamaica seems to be foundering in its efforts to establish a logistics hub which would take advantage of the increased shipping traffic facilitated by the expansion.

Jamaica is aiming to become the fourth logistics hub globally. The others are Rotterdam (The Netherlands), Singapore (Asia) and Dubai (Arabia).

In order to successfully establish a logistics hub, Jamaica will have to dredge the Kingston Harbour in order to ensure that bigger ships will be able to enter port, expand existing port facilities, construct a dry dock for ship repairs, establish a trans-shipment commodity port, an air cargo and passenger facility and develop the Caymanas Special Economic Zone.

However, the Maritime Authority of Jamaica (MAJ) has already declared that it is prepared to receive larger vessels that are likely to call at Jamaica's ports following the expansion of the Canal.

According to director general of the Maritime Authority, Rear Admiral Peter Brady, the third lane of the canal will accommodate larger ships called New Panamax.

Brady, in a JIS interview, argued that the new gateway would encourage larger ships to trade with Jamaica, but pointed out that shipping lines are most likely to enter into trade relationships with Jamaica if they are certain about the clearance, safety, pollution prevention, and inspection procedures.

Involved in the expansion of the canal is an extensive upgrade of the technology utilised in proving a waterway and guiding ships through it, where the very narrow clearance for the largest ships was based on facilitating the Titanic going through.

While our news team was at Miraflores three ships, including the Super Grace, went through the canal and exited into the Pacific Ocean.

Budgeted at US$5.2 billion, the third lane of the Panama Canal will have a revised door system for the locks. The new design retracting into the walls rather than opening and shutting like conventional double-sided doors, as is now the case. A lock takes eight to 10 minutes to fill with water and it takes a ship eight to 10 hours to transit the Panama Canal. The direction in which the shipping traffic flows is changed every six hours.

The current gates each weigh about 680 tons and are as high as a seven-storey building. Maintenance, done every seven years when a lane is closed, involves removing and floating them down to the ocean.

Operating by the mantra that the Canal does not stop, the only interruption so far was in 2010 when, during a drought period, operations were suspended for 17 hours. As it operates with freshwater, rain is critical to the waterway functioning and, the guide said, in Panama it rains eight months a year - including the day of the visit.