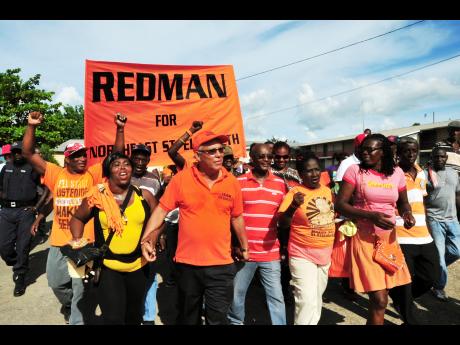 Paul Clarke
Evon Redman leads his supporters on a victory march after being given their backing to be the PNP's candidate for North East St. Elizabeth.

In an 'affirmation exercise' at the Santa Cruz Primary School in St Elizabeth, Redman received 339 yes votes while 127 delegates voted no.

He will now have to wait on the party's leaders for the final approval, but with a little more than seven in every 10 delegates voting for him it now seems a foregone conclusion that Redman will be selected to replace Raymond Pryce, who called a halt on his time in representational politics rather than face a challenge.

"I think it was a good result for me ...we worked very hard and had to overcome a number of challenges, but we overcame through God and prayers," said Redman.

"For those who did not support me, I am offering you an olive branch, because, at the end of the day, we are all PNP and we will have to work together to build the constituency," added Redman.

Hopeton McCatty, who presided over the affirmation exercise, said the process was quite smooth as the Comrades were in high spirits and there were absolutely no signs of rancour.

"It was a very peaceful exercise. The Comrades behaved themselves quite well and were in high spirits," said McCatty.

In the lead-up to yesterday's endorsement, supporters of Redman and Pryce staged a vigorous battle, which included slashed tyres, a court challenge and street protests.

With the dispute getting increasingly bitter, Pryce announced that he was no longer interested in being the party's standard-bearer in the constituency.

"I have decided to withdraw my name from the selection process," Pryce said in a statement to the party's leadership.

"I will therefore not be available to stand as a candidate for the People's National Party when the next general election is called."

While Pryce was not there for yesterday's exercise he was still targeted by some supporters of Redman, who made it clear that they did not consider him to be fit and proper to continue representing them.