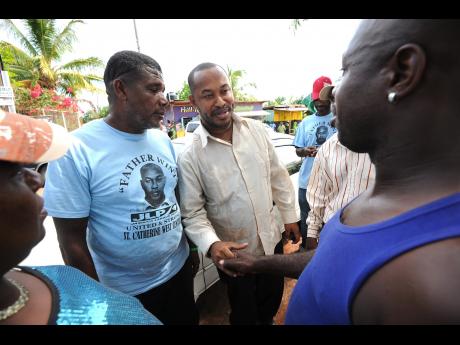 Ricardo Makyn
Devon Wint (centre) greets some supporters before his victory in yesterday's contest for the right to represent the Jamaica Labour Party in West Central St Catherine. 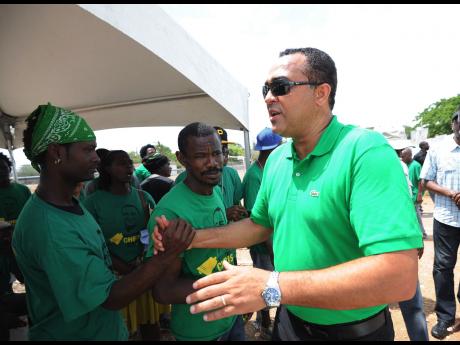 Ricardo Makyn
Dr Christopher Tufton greets some supporters during yesterday's contest for the right to represent the JLP in West Central St Catherine.
1
2

Christopher Tufton, once the golden boy of the Jamaica Labour Party (JLP), was last evening pushed further into political obscurity when he lost in his bid to become the party's candidate for St Catherine West Central.

Yesterday's candidate selection was to replace veteran parliamentarian Dr Kenneth Baugh, who is said to be retiring from

representational politics and leaving what is considered a safe JLP seat to one of the young Turks.

Tufton, a former cabinet minister in the Bruce Golding-led JLP administration of 2007-2011, was one of the biggest casualties in the party's defeat in the last general elections.

He lost the South West St Elizabeth constituency, but was named to the Senate by Opposition Leader Andrew Holness.

After backing Audley Shaw in his failed bid to oust Holness in the 2012, Tufton found himself out in the cold and resigned as the party's caretaker in the constituency.

He was also forced from the Senate by Holness, who used undated resignation letters to jettison those he did not believe he could trust.

But Tufton benefited from Arthur Wiliams' decision to take the matter to court when it was ruled that the attempt to remove them from the Senate was unconstitutional.

It appears though that the man who was once seen as a future leader of the JLP will have to park his drive to return to representational politics.