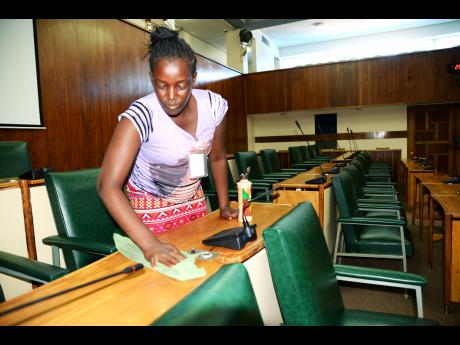 Jermaine Barnaby
Camille Henry, an employee of the Janitorial Technolgies Limited, sprucing up Gordon House yesterday in preparation for Brtish Prime Minister David Cameron, who will address a joint sitting of the Houses of Parliament tomorrow.

Cameron who is on official visit to Jamaica as a special guest of the Prime Minister Portia Simpson Miller-led government will depart tomorrow.

Jamaica House is reporting that he will be involved in several official activities in Kingston and St Andrew, including a floral tribute in honour of soldiers of World Wars I and II.

The United Kingdom leader is also slated to hold bilateral talks with Simpson Miller and will attend a reception with government officials, the business community and civil society.

The british prime minister will tomorrow address a joint sitting of the Houses of Parliament at Gordon House on Duke Street in Kingston. His presentation to members of the legislature will begin at 8:25 a.m.

Last Thursday, member of parliament for Central Clarendon Mike Henry urged his parliamentary colleagues to turn their backs on Cameron unless the issue of reparation for the ills of slavery is placed on the agenda for his visit to the island.

Henry reminded his colleague lawmakers that the Jamaican Parliament had approved a motion for the country to seek reparation from Great Britain.

"If it is not on the agenda, I will not attend any functions involving the visiting prime minister, and I will cry shame on those who do, considering that there was not a dissenting voice in the debate in Parliament," Henry said in a Gleaner interview.

In yesterday's publication of The Gleaner, Chairman of CARICOM Reparation Commission and Vice-Chancellor of the University of the West Indies Professor Hilary Beckles, in an open letter to Cameron, called attention to the issue of reparatory justice for the crimes against humanity committed by the British state and its citizens in the form of chattel slavery and native genocide.

"In this regard, I urge you to be aware that the issue of reparatory justice for these crimes is now before our respective nations, and the wider world," said Beckles, noting that "It is not an issue that can be further ignored, remain under the rug, or placed on back burners ... ."

Meanwhile, the prime minister of Japan, Shinzo Abe, will arrive in the island tomorrow as part of an official visit to Jamaica and as a special guest of the Government of Jamaica.

While in Jamaica, Abe will be involved in several official activities in Kingston and St Andrew, including a floral tribute in honour of soldiers of World Wars I and II, bilateral discussions with Simpson Miller, a visit to a cultural site and a dinner reception with representatives of the Jamaican Government, business community and civil society.