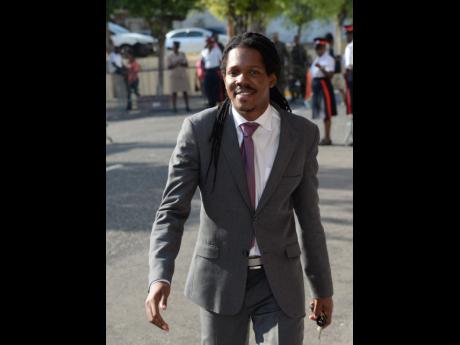 With his flashing dreadlocks and his straight talk in the language of the people, Crawford draws long applause and cheers as soon as he is introduced as the next speaker.

But his straight talk and radical approach to representational politics have not gone down well with some Comrades in his St Andrew East Rural constituency, and the first-time member of parliament (MP) is facing a battle for the right to continue as the PNP's standard-bearer in the seat.

Today, he faces businessman Peter Blake in a selection contest to be held at the PNP's Old Hope Road headquarters, with just over 500 delegates to decide his fate.

Crawford has had a tumultuous relationship with some Comrades as his vision of constituency development, by way of educating children, has not found favour with some who have warned him that "children have no vote".

"I tried some things in the constituency that were very different and very new, and I was not sure that the constituents were willing to accept it. And at the end of the day, it is the number of seats that wins the election," Crawford told The Gleaner recently as he admitted that he had considered walking away from the constituency.

"I was spoken to by some members, (and) I became even more convinced that the majority were in agreement, even if they were silent," added Crawford as he explained his decision to remain and to offer himself for a second term.

He has argued that his education focus is reaping successes, with a higher number of students getting better scores in the Grade Six Achievement Test; improvement in literacy levels, and improved secondary school performance among cohorts in schools that were considered underperforming.

Crawford - a lecturer at the University of the West Indies at the time he was elected in 2011 - taught some of the classes himself.

But some Comrades have several other complaints against the young MP and believe that Blake, a son of the soil, would better represent them.

While he does not enjoy Crawford's national profile, Blake, a businessman, was constituency chairman up to the 2011 general election and seemed a shoo-in to represent the PNP in the constituency before he was dumped for Crawford late in the day.

Today's contest is expected to be the last of the challenges to incumbents of the PNP, and the party's secretariat is hoping to put to rest internal squabbles which spilt into the public in the last six months.

The PNP's Deputy General Secretary Julian Robinson will be in charge of today's proceedings, with voting set to begin at 10 a.m. and close at 3 p.m.