Enter at your own risk! - Frolics & fights as students run riot in Half-Way Tree Transport Centre 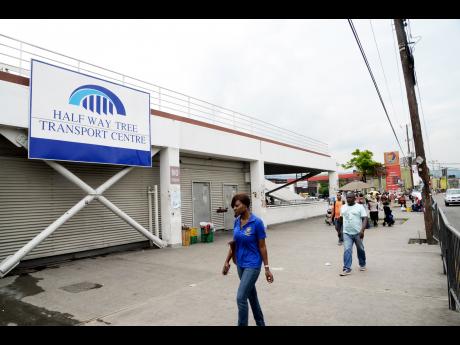 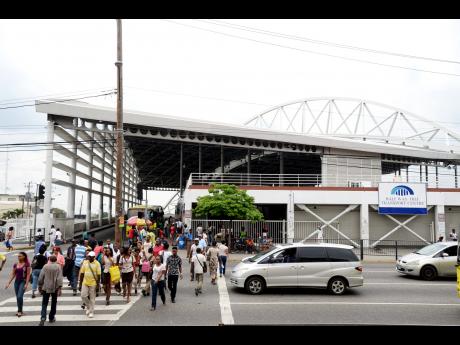 Jermaine Barnaby
The entrance to the Half-Way Tree Transport Centre. 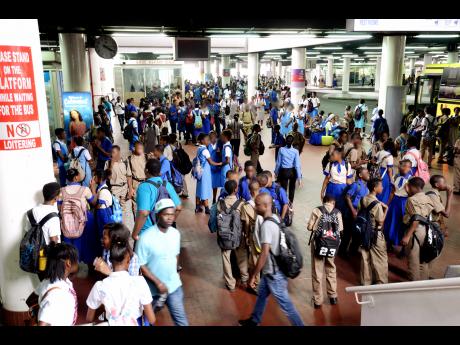 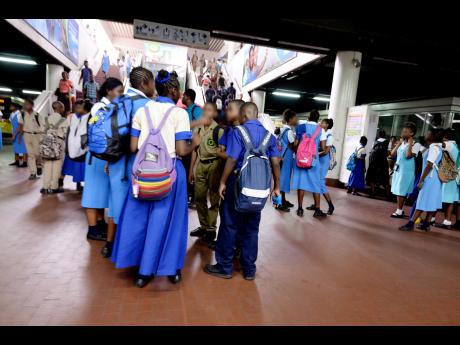 Two stabbings within hours of each other inside the Half-Way Tree Transport Centre just over one week ago underscored the lawlessness which continues to rule the facility.

This despite media highlighting the problem repeatedly over the years and promises from the police, school administrators and the operators of the $4.3 billion facility, the Jamaica Urban Transit Company (JUTC), that measures would be implemented to clamp down on the out-of-control schoolboys and schoolgirls who make the transport centre a no-go area for many.

"The pickney them rotten inside the centre, rotten bad, man," said a JUTC supervisor who operates out of the facility.

"No care how you provide buses for them, they don't go home. Two o'clock to five o'clock in the evenings is the most buses run in the transport centre. Every route wi try to fit bus on every five or 10 minutes and it don't make any sense because they are not going home," added the JUTC employee as he named several prominent high schools whose students are involved.

Since the initial reports of the violent and sometimes lewd behaviour of students in the centre, the authorities responded with the establishment of a police post on the top floor of the facility and a private security firm contracted to patrol the premises.

Deans of discipline from various schools were also tasked with the periodic monitoring of their students who use the facility.

But none of these measures has curbed the behaviour of the children, with almost total anarchy since the start of the new school year.

In one of the latest incidents two Fridays ago, one schoolboy had to be rushed to the Kingston Public Hospital after he was stabbed by a schoolgirl in the early afternoon. Two hours later, a second schoolboy was stabbed in the chest by three boys who accosted him. He had to undergo emergency surgery to repair a punctured lung.

According to general manager in charge of operations at the Half-Way Tree Transport Centre Linval Thompson, while the students are problematic every day, Friday is the worst day of the week.

"On Friday we have massive lingering because I guess they don't have school on Saturdays, so they want to stay there as long as possible, timing their parents to get home.

"There are at least 10 incidents on a Friday. Not all incidents are police-related, but the police have their hands full on Fridays," said Thompson.

"Pickpocketing, loitering, fighting, bloodshed, abusive language, that sort of thing. The security personnel roam and we do get reinforcement from the St Andrew Central on Friday to complement the five that we would have on shift from the police post, and we have four security core members as well, so it is a nine-member security team on a Friday evening, and we get some reinforcement from St Andrew Central.

"We have at least 40 police incidents per month, but the majority of what happens occur on a Friday.

"We lose a lot of money because the adults coming into the centre at five o'clock in the afternoon on a Friday will just turn back and seek the alternative because the crowd is still there at five," added Thompson.

It was a similar story from the JUTC supervisor, who asked not to be named.

"Friday is the worst day in the transport centre because none of the kids want to go home. I don't know why, but Friday, all seven, eight o'clock in the night and you find say the kids still in here. Friday is also when the most fights break in here. Is like every child has to fight before they go home, and I don't know why.

"One evening mi see dem beat a youth on the staircase and him just stand up a take the licks, and then him go up the stairs and then me see him a come back down wid a big gun inna him hand and run down di boy them. Mi si that wid my own eyes just a few months ago," said the supervisor.

When our news team returned to the transport centre last week, students were seen entering the facility from as early as 2 p.m. and were still there at 6 p.m., making no effort to board any of the available buses.

Students from various schools could be seen in groupings, with some boys sporting earrings and caps turned backwards. Most had earphones and some were seen dancing up a storm.

Some boys jostled for the girls' attention, latching on to the ears of any who bit the bait and grabbing on to others who dared to ignore their advances.

Some of the girls also sought the attention of guys and even other girls, with hugs being the mandatory form of greeting.

Persons who regularly use the bus centre told our news team that the loitering was a daily occurrence.

"JUTC persons say the Government say a six o'clock the latest they (students) should leave out here because some of them have extra things like sports," one security guard told The Sunday Gleaner. "But I believe by 3:30 p.m., they should find themselves on a bus because some a come in here come look man and woman.

"No big people no come in here because of them, as they loiter, fight, cuss and do everything that is bad and don't care."

Changed out of uniform

A lot of young boys were seen out of uniform interacting with those in uniform, and it is believed that some had changed out of their uniforms while others were past students who gathered daily at the popular meeting spot.

"They dress up and come in here and carry away the little girl dem and have them in a the back part a di centre. A so them behave in here," said one JUTC driver.

"Some of them (girls) all change them clothes and man come pick them up, and when you look, you see them put on back uniform when them ready to go home and take off them false hair and all them something there."

Convenience store operator Debra Martin said the students have been both good and bad for her business, which is based in the centre.

"You have some who come and they buy and leave while others loiter and they bang on the glass, and so the adults don't want to come in," said Martin.

One mother, who was spotted with her 13-year-old daughter awaiting a bus, said she believes the centre has turned out to be a negative thing for the schoolchildren.

"The centre is doing more harm than good because all they are doing in here is just grouping up, especially on a Friday," said Chanelle Homes.

"They need police in here to put them on the buses and send them home. Sometimes I am in the bus and parents call the children and they will say 'Mommy, I am at home'."