Homeless cross-dressers living among the dead 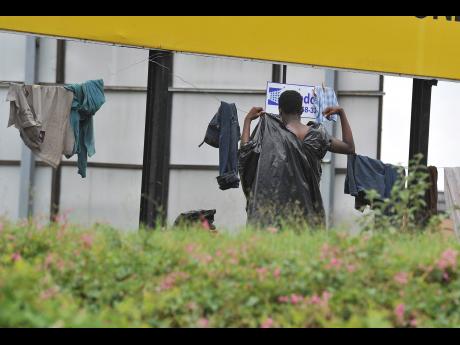 Norman Grindley
A cross-dresser doing laundry inside the Cholera Cemetery on Waterloo Road during a break in the rain yesterday. 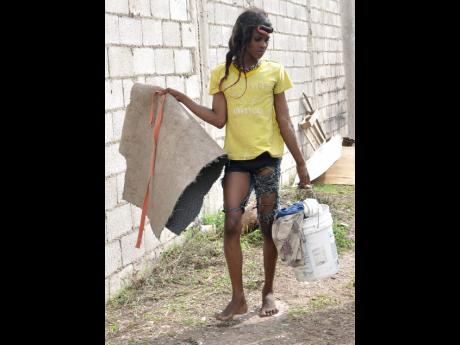 Jermaine Barnaby
One of the cross-dressers being evicted from the Shoemaker Gully in New Kingston.
1
2

Having been forcefully removed from the Shoemaker Gully in New Kingston little over a year ago, a group of homeless men, some of whom are cross-dressers, has resorted to living among the dead.

The men have made the Cholera Cemetery, which is across from the Canadian Embassy on Waterloo Road in St Andrew, their new home.

But as has been the case wherever they have settled, they are unwelcome neighbours.

"The Gores own that property, and as long as they are aware that anybody is on it, we actually get calls or some emails from them," said Town Clerk Robert Hill.

"[The] Public Health [Department] has squared it (Cholera Cemetery) off that it no longer poses a public-health threat. It is mainly used for billboard advertising now, but there are some plans for developments there. So the persons (homeless men) have really been causing some amount of disturbance, and it is in the confines of an embassy, which may cause some sort of security issue," added Hill.

According to Hill, his office has been working with the Jamaica Forum for Lesbians, All-Sexuals and Gays, and meetings have been held with that organisation, the mayor, and representatives of Jamaica Aids Support as they seek to identify long-term accommodation for the particular set of homeless men.

"We are still going through the technical ramification of trying to find a location. We really haven't found anywhere, but we are also monitoring the situation at the Cholera Cemetery and getting them removed," said Hill.

there and causing some amount of discomfort and disquiet with the surrounding neighbourhood."

"We have, on more than one occasion, moved them from there, and, of course, the report is that their families don't want them and they don't have anywhere to live," added Hill.

The Kingston and St Andrew Corporation is also looking at lands it owns with the aim of identifying a suitable location for accommodations to be built for the group of nomadic young men.

"If we give them four or five locations within the municipality and they select the one they want, some funding agency would have to find the money, whether an international lobby group or whatever, and they find their engineers and architects and build what they wish within the permissions of the city engineer department and my department," said Hill.

But according to South East St Andrew Member of Parliament Julian Robinson, who had, through his role as a member of the board of the Peace Management Initiative (PMI), moved to provide an intervention for the group of young men, it is difficult to find a solution for them due to their behaviour.

Robinson intervened after the homeless men were accused of carrying out robberies and incidents of public disorder in the New Kingston environs, which forms part of his constituency,

"There are not many people who want them to be housed anywhere near them because of their behaviour. That's just the hard-core reality," Robinson told The Sunday Gleaner.

He said the focus has been dealing with the issue of their behaviour, a task that has been undertaken by the PMI through funding from the British High Commission.

But not all the men have reacted favourably to the intervention, according to Berthlyn Plummer, the PMI's senior social worker.

"The psychosocial intervention has included counselling, personal development, conflict resolution, and mediation," said Plummer. "It is 30 of them that we have been working with on and off. Some of them are very receptive, some are a little hesitant, and some are not receptive at all because they have different issues and different expectations of anything you are doing with them."

Plummer pointed out that the PMI has been working with them since last year because they are a marginalised group as the organisation is neither an activist nor an advocate for homosexuality.

"We have worked with other marginalised groups and we will see family [members] come forward and they are embraced by their community and things like that, but not this group," said Plummer. "It is either they don't want to stay in the communities or the communities don't want them."