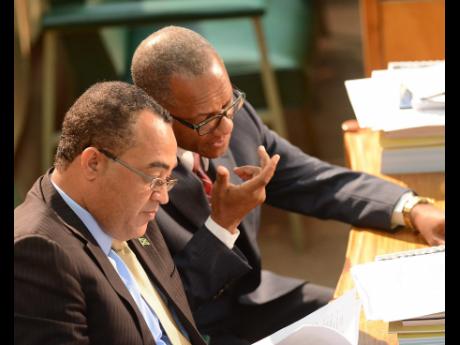 Opposition Senator Arthur Williams has served notice that he will not yield to the temptation to vote along party lines when senators vote on the Caribbean Court of Justice (CCJ) to replace the Judicial Committee of the Privy Council as Jamaica's final court of appeal.

The Opposition Jamaica Labour Party (JLP) has been adamant that the CCJ should not replace the Privy Council without a referendum, while the governing People's National Party (PNP) needs at least one opposition senator to side with it to pass the three bills.

With Williams and his colleague opposition senator Dr Christopher Tufton out of favour with the leadership of the party, there has been speculation that either or both could break ranks with the Opposition and side with the Government.

But Williams has made it clear that his party's position will not be a factor in his decision.

"I do not agree - nor would I even consider - that how I vote should be based on what my future in the JLP may be," asserted Williams, who bucked heads with JLP Leader Andrew Holness, who had used pre-dated resignation letters to boot Williams and Tufton from the Senate.

Williams took the matter to court and prevailed over Holness, leading to his reinstatement in the Upper House.

Last week, Williams addressed those urging him to side with the Government during a present-ation to a Rotary Club meeting in the Corporate Area.

But at the end of his presentation, the country was no clearer on how he will vote.

"Certainly, my voting in a particular way because I may have no future in the JLP is not the 'mature deliberation' which the court reminds us is the basis for deciding how to vote," asserted Williams in reference to the judgment handed down in the case he brought against Holness over the use of the undated resignation letters.

'That would be putting my personal interests before the interests of the people of Jamaica. My future in the JLP is of no relevance to this important decision for our country as to what should be our final court," declared Williams.

"Each senator is expected to give conscientious thought to every topic that comes before the Senate for discussion and vote," said Williams.

He continued: "Every member of the Senate takes an oath to be faithful and bear true allegiance to Jamaica, to uphold and defend the Constitution and the laws of Jamaica, and to conscientiously and impartially discharge his or her responsibilities to the people of Jamaica."

The opposition senator further argued that it would be against the spirit of the Constitution if senators were to vote along party lines.

"So, I will give mature deliberation to these legislative measures, which are designed to remove the Judicial Committee of the Privy Council as our final court and replace it with the Caribbean Court of Justice," added Williams, leaving the country guessing.