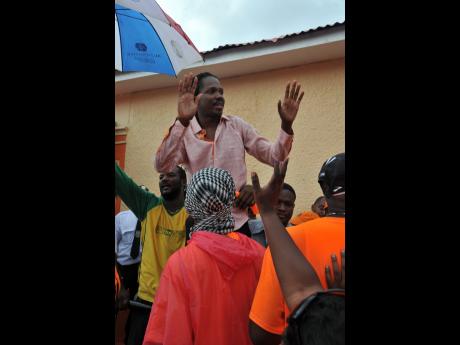 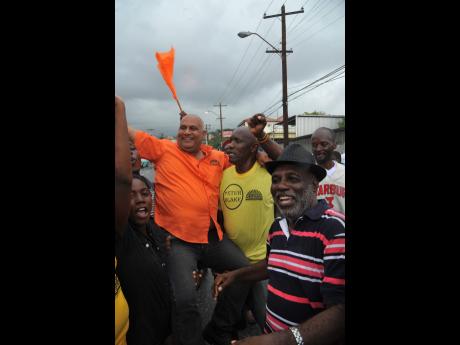 Norman Grindley
Peter Blake and supporters celebrate his victory in the selection exercise. 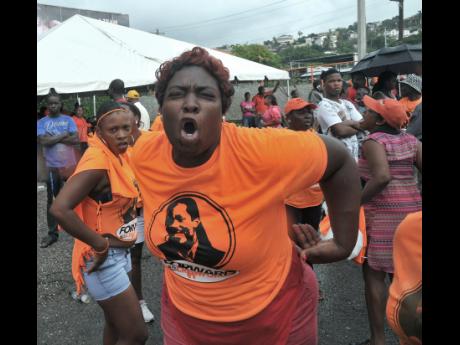 Norman Grindley
Angry supporters of Damion Crawford vent after he lost yesterday's selection run-off to be the People's National Party's candidate for East Rural St Andrew at the next general election.
1
2
3

WHEN THE results of the People's National Party (PNP) run-off for East Rural St Andrew were announced yesterday, a wave of shock and disappointment ripped through the Old Hope Road, St Andrew, premises of the PNP headquarters.

First-time Member of Parliament Damion Crawford is likely to be relegated to the periphery of representational politics as he was only able to muster 166 votes to the 218 garnered by his challenger, businessman Peter Blake.

Supporters of the outspoken parliamentarian, who hours before were confident of his victory, stormed the entrance of the PNP headquarters protesting the outcome.

When the crestfallen Crawford appeared, he was led in messianic-like fashion to the rails of the party office entrance.

It was from here that he addressed Comrades and called for them to accept the results of the run-off exercise.

"Comrades, I am as surprised as you are by the results, but at the end of the day, the party has procedures ... and, therefore, the results we have to accept," he said.

To this, his supporters issued a resounding 'No!'

Further attempts by Crawford to appease supporters proved futile, as some touted a suggestion for him to run as an independent candidate.

"If dem fight yuh out, wah yuh a stay in deh fa?" asked one irate supporter.

Crawford made further attempts to reason with his supporters, explaining that he was confident that the election was conducted fairly and that he could vouch for the integrity of Deputy General Secretary Julian Robinson, who oversaw the internal run-off.

It was at this point that one man began to chant, "No Crawford, no vote!" which caught on with the other supporters.

One woman told The Gleaner that if Crawford was not returned as the candidate for the constituency, his supporters would not turn out to vote when the next general election is called.

"East Rural (St Andrew) gone to the JLP because wi nah give them wi vote if a nuh Crawford a run," she said.

Just outside the walls of the PNP headquarters, a different picture emerged as the handful of supporters for Peter Blake celebrated the defeat of Crawford.

For them, this was a way to discipline the first-time MP, who they said disrespected them.

William Boyd, of the Mavis Bank division, spared no words in his castigation of the defeated Crawford.

"Peter Blake win because Damion is disrespectful ... . Yuh style people, you call people 'dunce', you call we 'plyboard Comrade' and Damion don't communicate with the people on the ground," Boyd said. "From Damion win in Mavis Bank division, him don't have an executive meeting with the people. Is two thing we ask Damion for - road and water. We nuh get none a them."

Boyd added: "The point is, Damion is a first-time MP. Is not a matter of what him don't do to all that, but is the way you deal with the people ... . Him disrespect wi and him lose communication altogether. Him no communicate with us none at all, that is his biggest problem."

Boyd pointed out to The Gleaner that residents who live in the more hilly sections of the constituency felt neglected by Crawford and, as such, registered their displeasure by ousting him.

"We discipline him today ... . We have to punish him because we put him there. Him no pay attention to the divisions that in the hills, him only deal with those on the plain. We can't talk to you, so we can't work with you," he said.