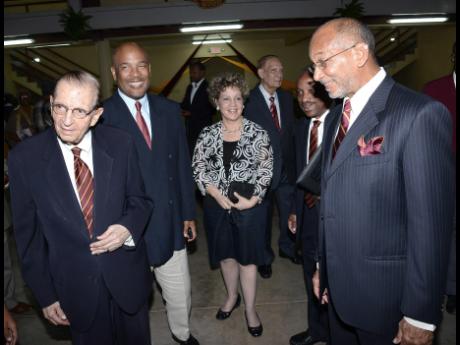 THERE WAS an atmosphere of celebration and nostalgia as Wolmerians from all walks of life came out to share in the inaugural launch of the Wolmer's Hall of Fame.

Chairman of the Wolmer's Trust, Milton Samuda, declared that 14 individuals would be posthumously inducted into the Hall of Fame, in addition to two living legends, former Prime Minister Edward Seaga and Sybil Francis, pioneer social worker.

Seaga entered Wolmer's Boys' School in 1942, following in the footsteps of his father and uncles. Francis, who had a long and distinguished career as a social-welfare officer and as the first tutor in social work at the University of the West Indies, playing a leading role in policy development for the social services, was first enrolled at Wolmer's in 1924.

Education Minister Ronald Thwaites, who delivered remarks during the ceremony, praised the induction of the living legends.

"The induction of the Most Honourable Edward Seaga and Mrs Sybil Francis into the Wolmer's Hall of Fame is indeed a fitting tribute to these two distinguished public servants, and I hasten to add my personal commendation and that of the Ministry of Education," he said.

Thwaites also gave personal reflections on the lives of Seaga and Francis.

"I had the honour to 'follow backa' Mrs Francis in the Department of Social Work and the social-welfare training institute at the University of the West Indies as a young academician and I have had also the honour of looking in admiration across the aisle of Gordon House at the Most Honourable Edward Seaga," he said.

"Their personal successes and achievements underscore the value of a good education and prompt one to reflect on the significant changes that have occurred to the Jamaican landscape," he added.

Among the other individuals inducted into the Hall of Fame were former custos of Kingston, Dr Ludlow Moody, and former Governor General Sir Florizel Glasspole.