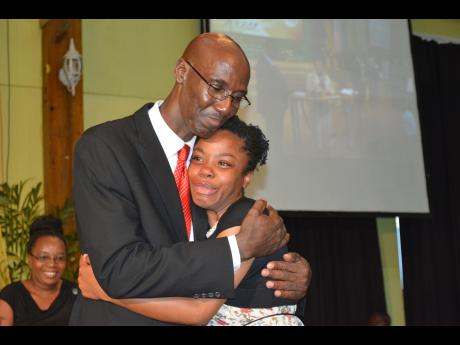 Contributed
A teary-eyed Aneak Riley from St Mary hugs Pastor Everett Brown, president of the Seventh-day Adventist Church in Jamaica, after the announcement that she was the Jamaica Union Conference 125th anniversary recipient of a full four-year scholarship at Northern Caribbean Univer-sity. She is pursuing a degree in nursing.

One hundred and twenty-five Adventist individuals, groups, churches and organisations were recognised for exemplary service on Saturday during the 125th anniversary celebration of Adventism in Jamaica, held at the Seventh-day Adventist Conference Centre in Montego Bay, St James.

The awardees were selected for their efforts in various ministries of the church, namely publishing, education, health, community service, pastoral ministry, youth and evangelism and drawn from the more than 740 congregations islandwide along with the church's two institutions - Andrews Memorial Hospital (AMH) and Northern Caribbean University (NCU).

In addition to the 125 awardees, eight others received special awards and four students received scholarships to NCU.

The oldest living baptised member of the church in Jamaica, 103-year-old Adassa Henry Johnson, received a special award for her faithful and dedicated service.

She got baptised at 10 years of age and served in youth ministry and community outreach while she was active during her 93-year church membership.

She was unable to attend but spoke at the ceremony through a video interview.

"I feel happy, I can say, 'Glory!' From I was a small girl coming up, I just love my church. The Lord provided every way for us. I was glad that many more could live and serve the Lord in Adventism," she said.

Since Adventism was introduced to the island in 1890, members of the church and its institutions have contributed widely to national development through the delivery of health services in institutional and community efforts, delivery of education through a university, high, preparatory and basic schools, and community

Speaking at the ceremony, Pastor Leon B. Wellington, vice-president of the Inter-American Division of Seventh-day Adventists (IAD), thanked all who have helped the Church in its work in Jamaica.

"To all members, non-members and businesses who have supported us during our annual ingathering campaign, the proceeds of which are used for community support - you are a part of the team and the successes we celebrate today of having achieved 125 years. We have been blessed with your gifts and talents in so many remarkable ways. It has not been 125 years of idleness or just serving ourselves. We have been getting our hands dirty as we seek to uplift humanity physically, socially, emotionally and, yes, spiritually," Wellington said.

The theme of the celebrations is 'Looking Back ... Reaching Forward with Christ'.

The church will host two more events to mark its 125th year in Jamaica. On October 25, members will undertake a facelift to the 172 police stations islandwide. Then, on November 22, a grand anniversary expo, health fair and heritage quiz will be staged on the grounds of NCU in Mandeville, Manchester.