'My motive is betterment of the people' - Blake to focus on education, employment, governance and social interaction after Crawford ouster 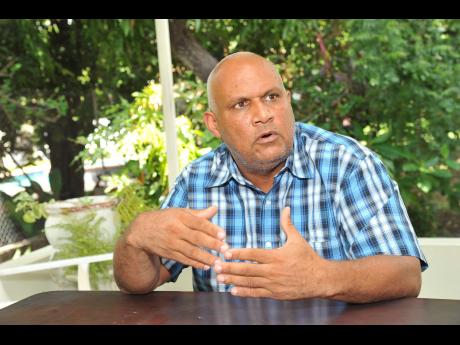 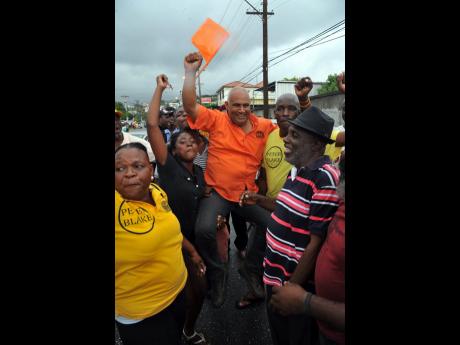 Norman Grindley
Blake is hoisted by supporters after being declared winner of Sunday’s run-off selection for the People’s National Party’s candidate for East Rural St Andrew.
1
2

Peter Blake claims that the idea for the creation of an integrity commission in the People's National Party (PNP) was his idea.

The PNP established its integrity commission, which was part of efforts to fight corruption of all forms in the community and to rid itself of undesirable persons running for public offices.

"The integrity commission, if Omar [Davies] will admit, is my idea; to say we need to find a mechanism that sets us apart in the public domain, to say here is transparency in terms of how we are vetting our candidates," Blake told The Gleaner yesterday.

But in a twist of fate, Blake was removed from the PNP's ticket in 2011 as a candidate for the general election and replaced with Damion Crawford, the fiery dreadlocked youngster who burst on to the political scene.

"It is a chapter in my life that I would love some closure," Blake told The Gleaner, while acknowledging that he was aware of rumours that the commission found him unsuitable to be a candidate in 2011.

"I don't see anything in my character that would exclude me from that standpoint," the St Andrew-based businessman said.

With rumours flying, Blake wrote to PNP General Secretary Paul Burke asking for his intervention, and was told that there was no issue regarding his character to stand as a candidate.

"The party secretariat has not received any negative or adverse report on you, nor have any of the national officers or the regional chairman advised me of such," Burke said in a September 17 letter to Blake.

Seemingly spurred on by the assurance from Burke, the new PNP standard-bearer said he was now on a mission to ensure East Rural St Andrew remains in the columns of the PNP after the next general election results are counted.

"Even if the JLP sends Andrew Holness, I am going to win by over 1,000 votes," Blake declared.

The JLP has named Senator Alexander Williams as its candidate for the seat, even though Audley Gordon, a former councillor in the Kingston and St Andrew Corporation (KSAC), is being encouraged to take over from him.

When Crawford won the 2011 polls, it was the first time since 1997 that the PNP was winning East Rural St Andrew.

"Presently, it is marginal, but when I am finished with it, East Rural St Andrew will be a solid PNP seat," Blake said.

Crawford contested the 2011 election against the Jamaica Labour Party's Joan Gordon-Webley. He polled 9,634 votes to Gordon-Webley's 9,375 votes, winning by 259, a margin that Blake said would have been far greater had he contested the seat.

For Blake, the decision to push him aside in 2011 may not have been due to his winnability but rather because of Crawford's youthfulness in order to counter the effect of Andrew Holness, who had just been sworn in as Jamaica's first post Independence-born prime minister.

He said that having been asked to step aside in favour of Crawford, he was "gracious" and gave 100 per cent support, which led to the election success.

For Blake, had it not been for unity, the PNP, with Crawford as candidate, would not have won the seat against Gordon-Webley.

"If she had run against me, she was going to lose worse," said Blake.

"I would have won by a much wider margin."

On Sunday, Blake got 217 delegate votes to Crawford's 166, a result which he said came as no surprise since he has been the face and muscle of the PNP for 45 months in East Rural St Andrew before the arrival of Crawford.

"The biggest mistake that Damion has made, the most costly mistake, is that he got caught up in his own public relations. He was of the belief that it was about him and not about all of us who work to put him in the position," Blake told The Gleaner.

Noting that several persons like Crawford, such as Raymond Pryce, Dr Christopher Tufton and Lloyd B. Smith, have bitten the dust after just one term, Blake said that one major lesson for persons is not to get caught up in self.

Among the issues Blake said cost Crawford his place as the PNP's chosen one in East Rural St Andrew was the dismissal of what he called 'handout politics', as well as his failure to embrace the leaders and workers of the constituency who helped secure his win.

Blake said Crawford missed the mark when he drew a hard line against assisting persons.

"If a person has a leaking roof and does not have the wherewithal, they need an intervention. If someone say they want a ply board, I don't think they want to hoist it up into a tree ... . There are welfare and social issues and in a large measure a politician is also a welfare agent," Blake said.

Look out for elderly people

Among other things, Crawford said he would not encourage the giving out of bun and cheese at Easter, a popular political tradition. He also frowned on the practice of giving out back-to-school vouchers, saying it was an inefficient use of resources; and that it was unethical for politicians to attend funerals of persons in a bid to boost their popularity.

Blake, however, said that while Crawford was well-intentioned, he failed to demonstrate an understanding of people and their needs.

"Even the bun and cheese thing is an evolution of the fact that you look out for these elderly people. It is not about giving bun and cheese for your family that can afford to buy five. It is just a recognition of bringing a little joy to people who are the most in need for that joy," Blake said.

He added: "You have to deal with the here and now while you plan for the future and you do what is necessary to get to a brighter day."

Blake vowed that if elected as MP, he would be building on some of the things that Crawford did in his one term.

He said his focus would be on four broad areas: education, employment, governance and social interaction.

He said that he would be dedicating his salary as MP to improving basic schools in his constituency to ensure that every child, by age six, is able to read.

"I am all right in my household and my family will continue to be blessed as we have been blessed," said Blake, who confessed not knowing what it is like to be hungry.