Calabar Primary and Infant Receives The Gift of Books 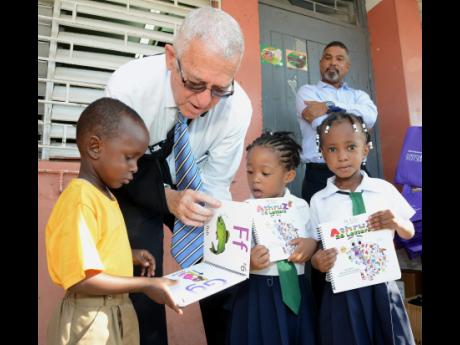 Ian Allen
Ronald Thwaites (second left), minister of education, looks through the books donated to students at the Calabar Basic School by Books4Kids during a presentation ceremony at the school in Central Kingston yesterday. The students are, from left, Dantae Bogle, Shari-Jade Webley and Tessan Dunnigan.

The sounds of lively worship greeted us as we arrived at the Calabar Primary and Infant School to join the Palmyra Foundation in its book-distribution drive at the school.

The foundation, through its Books4Kids initiative, selected Calabar Infant as one of 32 early-childhood institutions to receive books in week four of the foundation's 2015 book-distribution schedule.

The Gleaner joined founders of Books4Kids Frank Perolli, and Ragni Trotta, and sponsor of the initiative Michael McMorris of Kronos Investment and Development, who were partaking in the devotional exercise that was already under way.

The students stood in queues as they sang their school song and recited their school creed with excitement and pride to signal the end of the devotional exercise.

The excitement was, however, far from over as a new wave swept over the school when Minister of Education Ronald Thwaites was ushered on to the compound to thunderous applause and cheers from the students.

"Good morning, Mr Sir. We are fine, thank you, and how are you?" the students chimed in chorus in response to a greeting from Thwaites.

"I am happy to be here to pay respects to your principal and teachers and the members of the Palmyra Foundation, the Books4Kids movement who are here to visit this morning, and I have one word for you: If you can read and write, then you are going to turn out bright," Thwaites said.

When he asked for those who wanted to be bright to raise their hands, a sea of tiny palms stretched above the different sections of the quadrangle where the students stood in lines according to grade.

"... Reading and writing and mathematics are so important to your future, and the gifts of books being given to the infant school will help us to go further along that line," Thwaites added.

Perolli, Trotta, McMorris, and Thwaites knelt to present the books to the angelic toddlers.

"Thank you, sir. Thank you, miss," the little children said as they lavished hugs on their guests.

Since its inception in 2007, Books4Kids Jamaica has distributed more than 155,000 books in more than 130 schools islandwide.