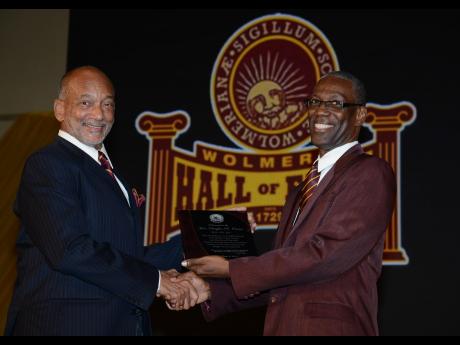 Having successfully raised more than $100 million for the construction of a new state-of-the-art auditorium at his alma mater, Douglas Orane has extended an open offer to assist schools which want to fund raise for infrastructure projects.

Speaking during the inaugural induction ceremony of the Wolmer's Hall of Fame last Friday, Orane issued a call for schools to get in touch with him so that he can recreate his successful fundraising for the construction of what is now the Douglas Orane Auditorium.

"I want to put a challenge to schools out there, which have projects that they want to do, that I am willing to offer help to fundraise because we need to replicate what we have done with this Wolmer's auditorium," Orane told those who gathered for the ceremony at Wolmer's in Kingston.

Education Minister Ronald Thwaites has welcomed the announcement by Orane and has lauded him for his commitment to education in Jamaica.

"Orane's proposal means a great deal for education. Education can't be funded by the taxpayer alone. It already isn't; there is a huge multiplier of taxpayers' money from parents, philanthropists, businesses ... so we are very much in favour. Mr Douglas Orane has spoken to the National Education Trust, ... and his idea of not fundraising but friend-raising and then on to fundraising is a sound one," Thwaites said.