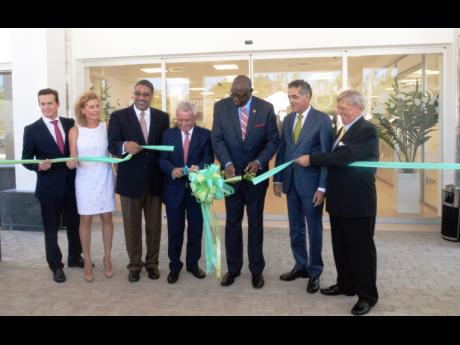 Hospiten Montego Bay is one of 19 hospitals operated by the international hospital network around the world, in addition to more than 100 health centres in Spain, the Dominican Republic, Mexico, and Jamaica.

"The Government welcomes this investment in the sector and appreciates the significant positive effect of your operations on the overall health-care facility in Jamaica," said Health Minister Dr Fenton Ferguson in his keynote address.

"Private health care is critical in our society, and particularly, in our urban centres and resort corridors. Satisfying the total health-care needs of Jamaica requires an ongoing partnership between government and private health-care providers.

Dr Wykeham McNeill, minister of tourism and entertainment, described the opening as an important step towards the creation of Jamaica's health Tourism product.

"I want to say that today is an important day, and we are living in an important time in Jamaica ... . We don't have to talk much about it again, because this is tangible proof that Jamaica is moving ahead with health tourism."

The family-owned-company facility is equipped with an image diagnosis centre, a surgical block, an intensive-care unit, a clinical analysis lab, a 24-hour emergency room and 22 hospitalisation rooms and will cater for both local and international clientele.