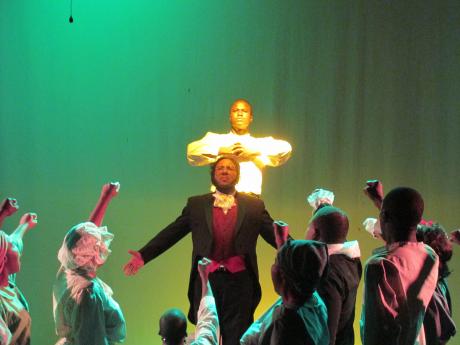 Paul Williams
A section of the grand finale of the opera '1865', with 'Paul Bogle' and 'George William Gordon' at centre.

THE IMMEDIATE post-Emancipation period in Jamaica was a time of great socio-economic hardship, especially for former enslaved Africans, who were not socially and financially prepared for full freedom. There were cries for justice, which the authorities ignored.

Things came to a head on Saturday, October 7, 1865, when Deacon Paul Bogle, a black, well-to-do and influential landowner and entrepreneur of Stony Gut/Spring Garden, and his followers, armed with bludgeons and accompanied by music, attended the trial of a black man from Stony Gut, who was arrested because he had trespassed on a long-abandoned estate.

But, another peasant from Stony Gut was arrested because he spoke out in court against the unjust arrest. Bogle and the others attempted to rescue the man, and a melee ensued. The man was rescued and the police severely beaten, after which Bogle, et al, retreated to Stony Gut.

The parish was filled with tension as more disturbances were anticipated. And on Wednesday, October 11, Bogle and his followers marched from Stony Gut to Morant Bay, where the vestry was meeting in the courthouse. Things got out of hand, and a full-fledge uprising followed. When it was all over, the courthouse and the adjoining schoolhouse were burnt down, and Custos Ketelhodt and others lay dead.

Governor John Eyre responded by sending troops to Stony Gut, where more than 400 peasants were killed and the village razed. Eventually, George William Gordon, an associate of Bogle, was hanged on October 23.

Bogle himself was captured on the main road between Torrington and Stony Gut and hanged from the centre arch of the burnt-out courthouse at Morant Bay as "a rebel and devil incarnate".

Tonight, at 6 pm. in Stony Gut, there will be an all-night vigil in commemo-ration of the 150th anniversary of the 1865 Morant Bay Uprising, where there will be a re-enactment of the events leading up to the uprising.

Revivalist King David is expected to set a Revival table, and there will be Kumina rituals at midnight.

At 6:30 a.m., Sunday, October 11, the re-enactment of the march from Stony Gut to Morant Bay will start. It is expected to last for two hours. At Morant Bay, a civic ceremony takes place in the precincts of the old courthouse at 10 a.m.

The events are being held in collab-oration with the Ministry of Youth and Culture.