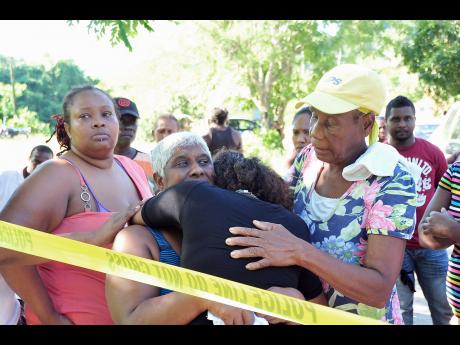 The Jamaica Constabulary Force's Counter Terrorism and Organised Crime Division (C-TOC) has joined the probe into the killing of six persons in Hanover last Thursday.

Assistant Commissioner Devon Watkis, who heads C-TOC, said a team of investigators is already in the parish assisting the Hanover police.

According to Watkis, early indications are that the attack on the family was a reprisal and is linked to the deadly lottery scam.

He added that investigators are looking at some individuals who are known to the Hanover police and may have been previously listed as wanted.

National Security Minister Peter Bunting, who visited the house in the Logwood area of Green Island where the six were killed, had also indicated that the attack was linked to the lottery scam.

"We are paying for it with the precious lives of innocent citizens - men, women and children. We have seen where elderly persons and the very young are being targeted, not because they were directly involved in lottery scamming, but because persons with whom they were associated were involved in this illegal activity," said Bunting.

Four other family members injured in the attack were reportedly still in hospital at press time.

In the meantime, Opposition Leader Andrew Holness has added his voice to those condemning the attack on the family.

"On behalf of all well-thinking Jamaicans, I wish to express deepest sympathies to grieving family and community members."

According to Holness, this act demonstrated a new low of savagery and lawlessness by certain elements in our society.

"Only a few months ago, we collectively mourned another execution-style murder of four Jamaicans in Clarendon. Only a few days before, we were shocked by the murder of two sets of sisters in separate incidents. It is clear that criminality is pushing the boundaries of law, order and civility in our nation," said Holness.