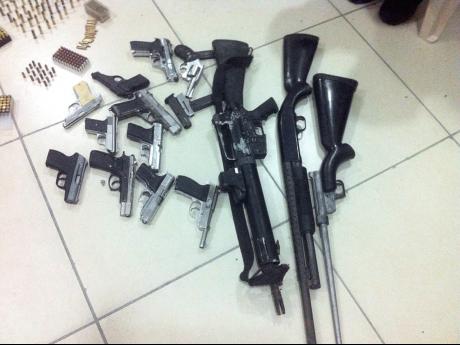 Contributed
Guns and ammunition believed destined for Jamaica, which were seized in Haiti.

A Jamaican believed to be a major supplier of guns and ammunition to the local criminal underworld was reportedly killed during a confrontation with police in Haiti last Friday.

While his name is being withheld by the police, Sunday Gleaner sources identified him by his alias 'Mention', and said he was part of a criminal gang that operated in the Old Harbour Bay area of St Catherine before he fled to Haiti to run a lucrative drugs-for-guns syndicate.

A law-enforcement official told The Sunday Gleaner that the Haitian police also took several Jamaicans into custody during the incident.

"We believe they are from the Old Harbour Bay area but have been residing in Haiti for some time. And we know them to be major suppliers of guns and ammunition to the criminal underworld in Jamaica," the law-enforcement official said on condition of anonymity.

Friday's incident came days after Haitian police, with assistance from the Jamaica Constabulary Force (JCF), seized 13 illegal firearms, assorted ammunition and 2,500lb of ganja. It is believed the guns and ammunition were destined for Jamaica.

It also came days before Deputy Commissioner of Police Glenmore Hinds is scheduled to lead a JCF delegation to Haiti for consultation with the Haitian police on measures to tackle the drugs-for-guns trade.