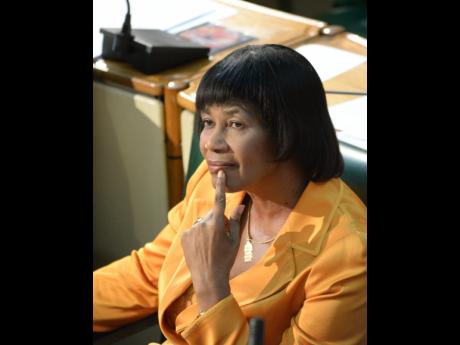 The favourability rating of Portia Simpson Miller has hit an all-time low, falling 42 percentage points from the time she was first sworn in as prime minister in March 2006, based on opinion polls conducted by Bill Johnson.

"Things are just wearing thin," pollster Johnson said of the woman who had "a lot of shine and glow" when she was sworn in as prime minister, but has since been on a "downward spiral".

In the latest Gleaner-commissioned polls, only 36 per cent of Jamaicans have a favourable opinion of Simpson Miller compared to her all-time high of 78 per cent which was recorded in 2006.

Johnson's latest poll was conducted from September 25-27 among 1,200 Jamaicans. The poll, which has a sampling error of +3% or -3%, was conducted shortly after the governing People's National Party (PNP), which Simpson Miller leads, held its 77th annual conference in Kingston.

In March of 2006, only 11 per cent of Jamaicans had an unfavourable opinion of Simpson Miller. That number has grown to 51 per cent.

The portion of Jamaicans who see Simpson Miller in a favourable light has fallen 14 percentage points since the Johnson poll which was done on the eve of the December 2011 general election. Then, Simpson Miller had a 50 per cent favourability rating, which may have played a role in her party securing a 2:1 margin of victory in that election.

Of those persons who view the prime minister in an unfavourable light, a combined 33 per cent say she is either not doing a good job or not doing anything. Another 14 per cent says she is too vulgar.

"Her problem is that she only speaks when she feels that she should and many people feel she is not giving the leadership that she should," said a former organiser in the PNP who asked not to be named.

He said that it would be a headache if the party's and its leader's favourability is down going into the next general election.

Since being sworn in as prime minister in January 2012, Simpson Miller has avoided sit-down interviews with the local media, causing the Press Association of Jamaica to express concern about this in a recent media release.

"Since she has been elected, she has been hiding behind Peter [Phillips] and the other ministers ... . She has not been around, and the numbers are telling that story," said Johnson.

He said, however, that if there is an election Simpson Miller's favourability would increase "because there will be a paid media campaign" aimed at improving her image.

Of the people who view Simpson Miller favourably, a combined 46 per cent say she either does a good job or tries her best.

But that should be little comfort for the Comrades who she will lead into the next election, as the number of Jamaicans who view Opposition Leader Andrew Holness in a favourable manner is way above those who see Simpson Miller in a positive light.

A combined 47 per cent of respondents opined that Holness works hard, practises good politics, cares about the people, and deserves a second chance to be prime minister.

The former PNP strategist said Holness' favourability rating may have been way higher had it not been for his unconstitutional action of resigning Dr Christopher Tufton and Arthur Williams from the Senate and the enviable mansion he is constructing.

The latest poll shows both leaders losing ground based on a previous poll conducted last September by Johnson. In the case of Simpson Miller, her favourability rating fell from 39 per cent to 36 per cent in the most recent poll, albeit within the margin of error.

Over the same period, her unfavourability rating increased eight percentage points, from 43 per cent last year to 51 per cent.

Holness, meanwhile, has seen a 10 percentage point fall-off in his favourability rating in the past year, slipping from 53 per cent to 43 per cent.

Holness went into the 2011 general election with a favour-ability rating of 47 per cent and his Jamaica Labour Party (JLP) lost.

As it relates to those who see him as unfavourable, 34 per cent of those surveyed said they do not have a positive view of Holness, compared to 26 per cent last year.

In the case of Holness, 48 per cent who have a positive opinion of him said they would be voting for the JLP and 12 per cent say they support the PNP.

"This shows how important being perceived as favourable is," said Johnson, as he argued that "if Holness or Simpson Miller's favourability rating keeps falling, then you can assume that the votes will fall".

Dr Lloyd Waller, head of the Department of Government at the University of the West Indies, Mona, agreed that, historically, the party leader carries the party and that the favourability rating of the leader is a good gauge of party support.

"There are people who would vote based on how favourable they view the party leader," said Waller.

He said, however, that there is now a trend where a growing number of people, albeit a small portion, are inclined to vote for a local representative based on the ideas he articulates rather than a political party because of its leader.

‘USELESS’ ... tops the list as Jamaicans think of Simpson Miller and Holness