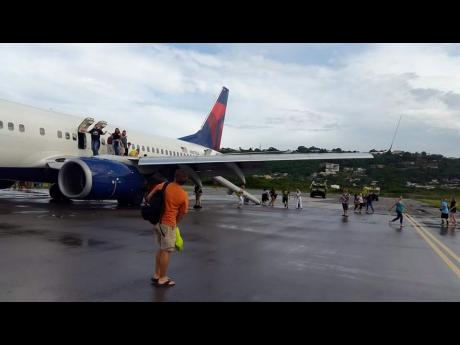 Contributed
Passengers are ushered off a Delta Air Lines flight after fire broke out in the cargo hold while the aircraft was taxiing for take-off.

The runway at Sangster International Airport in Montego Bay, St James, was temporarily closed yesterday after fire broke out in the cargo hold of a Delta Air Lines flight destined for Atlanta, Georgia, in the United States.

Delta said there were no reports of injuries arising from the fire onboard Flight 304.

Some 160 passengers and six crew members were on board.

The airline said the crew observed a flight deck warning of a possible cargo-hold fire on the Boeing 737-800 aircraft and quickly activated fire-suppression systems.

It further said passengers were evacuated from the aircraft through emergency exits on to the tarmac while first responders were dispatched to the plane.

Yesterday afternoon, the Jamaica Civil Aviation Authority (JCAA) said in a release that the aircraft was taxiing for take-off approximately 3:22 p.m. when the crew reported the fire.

"Emergency procedures were initiated and all passengers and flight crew members were safely evacuated from the aircraft," the JCAA said. "The Airport Rescue and Firefighting team and external emergency response agencies responded to the emergency."

The JCAA said investigators from its Flight Safety Division had been deployed to conduct an investigation into the incident.