JCF gets 10 new boats to assist in crime fighting 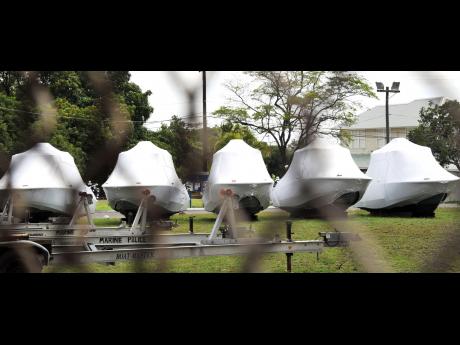 Norman Grindley
Some of the 10 boats that are to be officially handed over to the Jamaican Government by the United States on display at the Office of the Police Commissioner on Old Hope Road in St Andrew yesterday.

The Government's latest crime-fighting initiative, the much-talked-about Get the Guns campaign, is to receive a shot in the arm.

Ten new boats are being added to the fleet of the Marine Police, to assist the lawmen track down gunrunners, especially those plying the illicit trade between Jamaica and Haiti.

"They will be used for prevention and interdiction purposes. These boats will be deployed at the respective ports islandwide," Deputy Commissioner of Police James Golding, head of the Border and Vital Infrastructure Security Branch, told The Gleaner yesterday.

Gifts from the United States

He said the vessels were gifts from the United States government, which will officially hand them over to National Security Minister Peter Bunting and Police Commissioner Dr Carl Williams during a special function tomorrow morning at the Office of the Police Commissioner on Old Hope Road in St Andrew.

According to Golding, the boats will assist in the effective monitoring of Jamaica's coastal waters. The senior officer stressed that they would be used to patrol near the shoreline.

Police intelligence has confirmed that gunrunners have been smuggling illegal guns through the passage of the Jamaica waters.