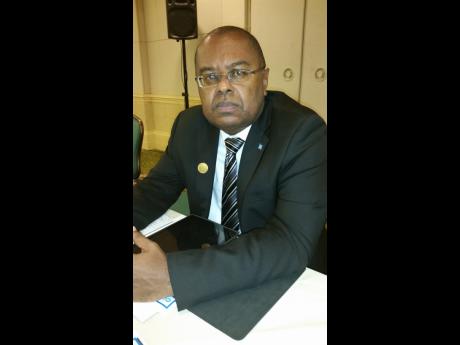 Contributed
James Fletcher … the message is 1.5 to stay alive.

Caribbean develop-ment actors are seeking to safeguard the region's interests at the upcoming international climate talks with the launch of a regional climate-justice campaign in Castries, St Lucia, last Thursday.

The campaign, dubbed '1point5 To Stay Alive', brings together artistes, including musicians and poets; climate negotiators; journalists; and other civil-society actors in a movement to raise awareness on Caribbean vulner-abilities to climate change, while urging action from the global community.

"The message is 1.5 to stay alive," said campaign patron Dr James Fletcher in a release to the media on Monday.

"The Caribbean needs a legally binding global agreement that keeps temperature increases below 1.5?C above pre-industrial levels by the year 2100," added Fletcher, who is also St Lucia's minister of sustainable development, energy, science, and technology.

A new global agreement on climate change is widely expected to be signed in Paris, France, in December. That deal, Fletcher said, needs to provide "adequate, predictable and accessible climate financing to support adaptation, mitigation, and other climate change-related needs in poor and vulnerable countries, including small-island states".

The Caribbean, given its location, small size, and struggling economies, is especially vulner-able to climate change, which could bring not only increased temperatures, but also extreme weather events such as droughts and hurricanes, as well as ocean acidification.

Together, such impacts hold serious negative implications for Caribbean lives and livelihoods, including risk of disease as well as challenges to water and food security.

"These are pretty serious issues," said award-winning St Lucian poet Kendel Hippolyte, himself a player in the campaign.

"We need to tell the world what we feel and what we want."

He has urged others to join the effort.

"Musicians, painters, dancers, writers, all artistes [need] to become involved in this campaign by using their arts, their shows, their websites, their Facebook accounts, and their concerts [to share the information]," he said.

The campaign, which has a website at www.1point5.info, is the collaborative effort of not only St Lucia's Ministry of Sustainable Development, Energy, Science and Technology, but also Panos Caribbean, the Caribbean Community Climate Change Centre, the Regional Council of Martinique, and the Caribbean Development Bank.

Interim Coordinator at Panos Caribbean Yves Renard said there is no question of the campaign's value, while seconding Hippolyte's call for others to join.

"I see two main reasons why this campaign is critical. One is that the Caribbean negotiators at COP21 need to feel that there is popular understanding of and support for the positions they will defend, and the rest of the world needs to see that the Caribbean is determined," he told The Gleaner.

"The other reason is that this is an opportunity to debate issues of climate change from a Caribbean perspective, to voice and hear what Caribbean people have to say and how it concerns them," Renard added.