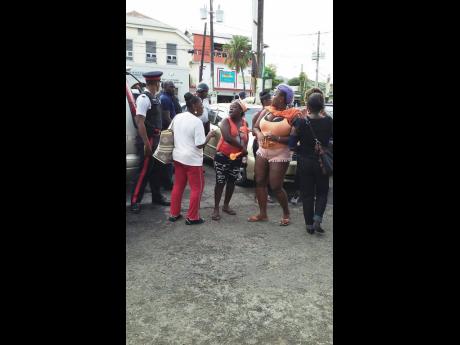 Gareth Davis Sr
The police were on hand to quell tensions among supporters of Member of Parliament Dr Lynvale Bloomfield and attorney-at-law Andrea Moore in Port Antonio, Portland.

Regarded as a People's National Party (PNP) stronghold, the constituency of Eastern Portland yesterday appeared split down the middle as supporters of incumbent Dr Lynvale Bloomfield and the winner of a recent selection run-off, attorney Andrea Moore, engaged in a war of words.

Moore's supporters took to the streets of Port Antonio in protest over the party's decision to overturn the results of the internal selection exercise on September 7 and return Bloomfield as candidate for the next general election.

"We are not backing down," declared Hansonetta Downer, a delegate who supported Moore in the selection that saw Bloomfield polling 133 votes to Moore's 141.

"The party's hierarchy should not force Dr Bloomfield on us as the delegates spoke clearly during the selection," Downer added. "Why then did they disrespect the delegates by having a selection? The party's campaign was centred on 'people power'. Then why is it they are trampling on our rights? This is not the democracy that Norman Manley fought for. They need to reverse the decision and allow the results of the selection to stand."

Moore's supporters had to endure a verbal onslaught from rival supporters of Bloomfield, who were clearly comfortable with the decision handed down by the top brass of the PNP during a meeting held at party headquarters on Monday night.

However, the police, who were on hand, quickly defused the situation.

Yesterday, Burke suggested that agitation in the Portland capital over any perceived decision by the party's leadership might be premature.

Burke remained evasive on who would be representing the seat in the upcoming general election.

"I am not saying a decision has not been made, but the party has not made an official position known in respect of the candidate issue in Eastern Portland," he told The Gleaner.

He said the PNP Secretariat had been receiving "calls of concern", but the party had not sent any of its officers to quell the firestorm.

"We have not sent anybody down there but will be engaging all delegates in due course," said Burke.

Deputy Mayor Benny White, who supported Bloomfield, told The Gleaner that the selection process was an indicative one, which was by no means the ultimate way of removing the incumbent as other considerations and consultations would have had to be made before a final decision was arrived at.

"It is by no means an overturn of the selection process," White said.

"In the first instance, this constituency is not recognised by the party, and therefore, other factors would have to come into play, which would then determine who earns the right to represent the PNP in East Portland. It is important to note, however, that the decision to allow Bloomfield to continue was not made at Monday night's meeting, but probably a week before," added White.

Moore defeated Bloomfield by eight votes, 141 to 133, in an internal election in September, which, in the minds of many, signalled a change of the guard in East Portland.

But after weeks of delay, deliberation, and consultations, wherein several polls were conducted, news has emerged that the PNP Secretariat has finally signed off on the candidate, in the form of Bloomfield, as the party's standard-bearer for East Portland.

While that decision was reportedly met with full approval from party president Prime Minister Portia Simpson Miller and Pickersgill, a constituency representative on the Regional Executive Council and a staunch supporter of Moore, Percival Latouche, has declared that he is not impressed with the party's decision to hand the seat to the incumbent.

"I am not satisfied with anything," argued Latouche.

"The democratic process was trampled upon, and despite the delegates' decision to support Moore, that has been set aside. All the polls done afterwards indicated that Moore was the more popular candidate who had won the hearts of the people," he added.

The ruling PNP is reportedly set to go into a three-day retreat in St Ann starting today, where all 63 candidates will be officially informed that they have been selected and introduced.