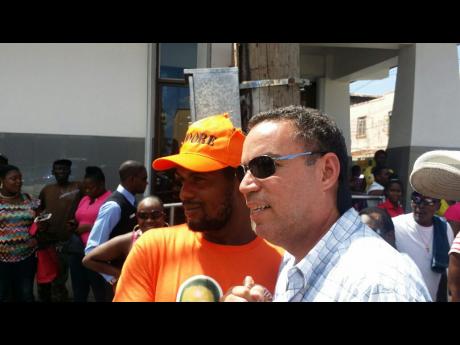 ANGERED BY what they claim is the party's decision to sneak Member of Parliament Dr Lynvale Bloomfield through the backdoor, disregarding the results of an internal selection exercise, some irate supporters of the People's National Party (PNP) are calling for Daryl Vaz to set up shop in East Portland.

The calls come against the background of a second straight day of protest by supporters of discarded winner of the selection, Andrea Moore, whose slim victory by eight votes over Bloomfield on September 7 has reportedly been dismissed by the party's hierarchy.

The Comrades converged along Foreshore Road and Harbour Street in Port Antonio, in large numbers, under the watchful eyes of the police.

no move to the west

However, Vaz, a two-term member of parliament (MP) from West Portland representing the opposition Jamaica Labour Party (JLP), said that while he understands the pain being experienced by supporters of Moore, who have made a genuine request of him, he will remain in West Portland.

"I fully understand what you are saying about wanting quality representation," Vaz told the PNP supporters.

"But my heart and roots are embedded in the west. It is rather touching that you have appealed to me to leave the west to come to the east, as it is clear that you are in need of a good candidate. I am the MP for West Portland and that will remain in the next general election," he further said.

But while Moore's supporters were literally begging the opposition MP to migrate, Vaz pointed out that the current unrest among PNP supporters in East Portland could very well boost the chances of the JLP in the next parliamentary election.

"It might be an opportunity for my party to sit down and select the best candidate to be the standard-bearer in East Portland, so as to wrestle this constituency from the PNP. Elections are about winning, and I am 100 per cent sure that if the JLP is able to present to the people of Jamaica an alternative to the ongoing crisis, and also to select their best 63 candidates, they could very well find favour with the electors," Vaz further stated.

The position of caretaker candidate for the JLP in East Portland was ratified last year by Party Leader Andrew Holness, and will see the minority leader in the Portland Parish Council, Derron Wood, representing that party in the next general election.