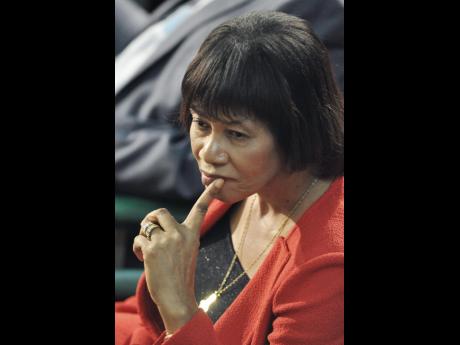 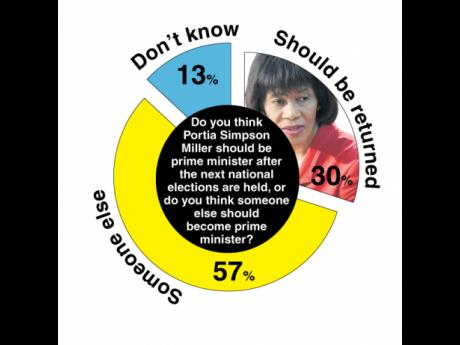 The hesitance, reluctance or downright unwillingness of Prime Minister Portia Simpson Miller to communicate with the populace is being blamed for more than half of Jamaicans polled wanting to see her exit the political stage sooner rather than later.

The latest Gleaner-commissioned Bill Johnson poll has found that 57 per cent of Jamaicans are of the view that Simpson Miller should not return as prime minister after the next elections are held.

Thirty per cent said the once most popular politician in Jamaica should be prime minister, with the remaining 13 per cent declining to proffer a preference.

The poll was done islandwide from September 25-27 with 1,200 residents and a sampling error of plus or minus 3.5 per cent.

Many Comrades are of the view that this is one time that silence has not been proven to be golden for Simpson Miller, who is in her fifth year as prime minister. "This approach makes no sense," declared Junior Thompson, an outspoken PNP supporter, who charged that Simpson Miller's taciturn temperament has been her undoing.

"For me, it comes down to one simple thing, communication; that has failed her and it may be too late," added Thompson, who blogs regularly on social media platforms.

He said Simpson Miller needs to be more accessible and allow open lines of direct communication with the media and the country.

"She (Simpson Miller) should provide demonstrable leadership by openly addressing policy issues; stay ahead of events/developments by providing timely info on policy issues to the country and rein in party members, especially members of parliament," said Blackford.

Thompson said that "through all the difficulties being experienced by her administration, if Simpson Miller was talking to the people and addressing issues in the party, she would be OK".

Thompson suggested that Simpson Miller "obviously has been receiving bad advice on communication and maybe even has the wrong team guiding her".

He suggested that the prime minister needed to take a position to, at least once monthly, address the nation on the challenges, present the way forward and answer burning questions being asked in the public domain.

"Portia needs to demonstrate to the nation that she cares, she understands and that she is in charge," asserted Thompson. "People don't want to hear that you are working, working, working."

He added: "They want to see that you are working and then they will work with you."

In so doing, Thompson said Simpson Miller might have helped to save some of her members of parliament.

"What surprises me is that Mr Errald Miller (Simpson Miller's husband) was a good manager," said Thompson. "So what kind of 'husbandly advice does he give her?"

He also had questions for senior members of the PNP with managerial capabilities.

"People like (Peter) Bunting, (Dr Peter) Phillips and (Mark) Golding; does she not listen to them or don't they offer her the benefit of their experience?" asked Thompson.