Youth must be encouraged to buy into democratic process - UWI lecturer 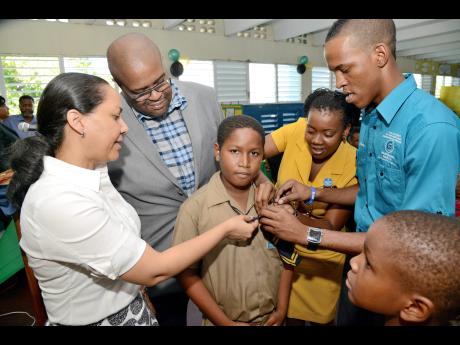 Apathy, lack of trust and confidence are issues Dr Lloyd Waller, head of the Department of Government at the University of the West Indies (UWI), is pointing to as deterrents leading a large number of young people to ignore issues of governance.

Speaking with The Gleaner following the launch of the UWI's Governance Society at the Rollington Town Primary School in Kingston, Waller noted that there are gaps within the culture of the country, which must be addressed in order to ignite interest among the youth population.

"I have been doing my research, and there is a high lack of trust in political representatives and a lack of confidence in their capabilities to transform the country, evidenced by our social and economic status as a country and individual economic status," he noted.

"It has been an issue since Independence, but the signs are even more obvious now that young people as old as 35 (years old), generally, are not interested in the political process," he declared.

He added: "It is problematic, because at the end of the day, it does not serve for a healthy democracy when the future (youth) is not buying into the democratic process. As such this is significant for me and we have to start addressing it."

Waller also indicated that a critical aspect of solving the problem will be huge investments in educational programmes which will sensitise the population on important aspects of governance.

"I lived in New Zealand for four years, and I was amazed at how many youths, as early as 19 (years old) are very much aware and involved in governance-related issues. When I did my research, it was all because governance is a huge part of the curriculum and that is the gap that exists here," he declared.

"People just don't know basic things, and if you don't know more, it's likely you won't be interested. I, therefore, believe that we have to start with young people, and this is history, because this is the first primary school where such a programme at this magnitude is being implemented," Waller told The Gleaner.

Twelve-year-old Daniel Curtis, president of the newly formed Rollington Town Primary School Governance Society, in welcoming the launch, noted that the programme would assist in enhancing education among children.

"We are the future and, as such, we need to be guided on the right path as it relates to making the right decisions on issues of governance," Curtis said.

"Transparency, accountability and participation are just a few key aspects of good governance and, as a society, our aim is to make this known to our peers. The primary aim is to promote this venture as we will have to be the driving force of change," he charged.