Jamaicans to get legal aid to CCJ 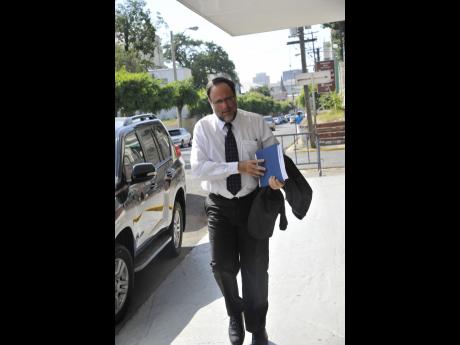 THE GOVERNMENT has indicated that amendments will be made to the Legal Aid Act to allow Jamaicans of modest financial means to be represented by state-paid attorneys at the level of the Caribbean Court of Justice (CCJ).

At present, legal aid extends to litigants all the way up to the Court of Appeal, but Justice Minister Mark Golding said that the cost of appeals to the United Kingdom (UK)-based Privy Council is something the Government cannot afford.

The minister, responding to a suggestion from fellow government Senator K.D. Knight for the amendment to the Legal Aid Act, said that it is a move being contemplated should the Senate pass three bills allowing for Jamaica to join the CCJ in its appellate jurisdiction and delinking from the Privy Council.

"The retention of the Privy Council as our final court has a substantially negative impact on the Ministry of Justice's resources as we have to bear the very high cost of the prosecution's representation at criminal appeals in London, and this depletes the already inadequate budgetary funds available to improve Jamaica's justice system. This amounts to tens of millions of dollars every year, which could be better deployed in strengthening the local court system," Golding said.

The minister said, too, that it could cost a Jamaican more than $170,000 for just airfare and visa to travel to Britain to have his case heard, an amount that will swell drastically when the costs of retaining UK lawyers to fight these appeals are added, as well as the costs of London hotels, meals and transportation.

"So while the UK Government has said that it remains neutral on this matter and is leaving it up to the Jamaican people to decide whether or not to stay with the Privy Council, the exorbitant filing fees at the Privy Council are consistent with a message that says to ordinary Jamaicans - 'you can't afford the cost of accessing this court, so it's time to move on'," Golding argued.

He said that, unlike the Privy Council, persons using the CCJ are faced with a filing fee of US$60 (J$7,200) regardless of the nature of the appeal or the amount claimed, and there is no fee charged on filing submissions generally.

"The CCJ has also invested in modern audio-visual technology, and its procedures encourage the use of ICT so that matters before the court can often be dealt with without requiring litigants or their lawyers to travel. Audio-visual facilities have already been set up at the Supreme Court in Kingston to allow matters before the CCJ to be argued from right here," Golding said.

The justice minister also commented on a suggestion from the Opposition that Jamaica should set up a final court of its own.

Describing it as "bizarre, unwise and unworkable", Golding said that Jamaica's local court system is already substantially underfunded and the fiscal challenges that underlie this reality are not going away for many years to come.

"It would be misguided and, frankly, shambolic to try to set up a new home-grown organ as our highest court with no substantial incremental budgetary support available to do so," Golding said.

"The CCJ Trust Fund disburses approximately US$5.5 million annually to cover the operating expenses of the CCJ. This amounts to $660 million. This expenditure is funded from the investment profits and gains of the CCJ Trust Fund. In contrast, the 2015-16 budget for the Jamaican Court of Appeal is $246 million. The reality of Jamaica's fiscal situation is that Jamaica is not able to finance the establishment of an acceptable domestic final court for many years to come. Such a final court, in order to ensure its independence, would need to be endowed upfront with a capital sum similar to the US$100 million that was borrowed by CARICOM governments and paid into the CCJ Trust Fund," Golding said.

"The Jamaican people will not trust, and investors, whether local or international, will not accept, a final court that is beset with the same funding constraints and related problems that are besetting the local court system," he added.

Jamaica borrowed US$26 million of US$100 million to establish the CCJ Trust Fund. Golding said that the setting up of a local court is "a pipe dream that simply cannot happen in an era when we are making the required fiscal sacrifices to bring our bloated public debt down to sustainable levels".

He said, however, that the Government is not averse, in principle, to Jamaica one day having its own final court, but said any such court would need to be no less well endowed from a financial perspective and have no lesser guarantees of independence from political interference than the CCJ.

"It will take many years before any local final court can be established that would pass that acid test," Golding said.

"We all agree, I believe, that we must leave the Privy Council without further delay, so let us move to the CCJ right away, with an understanding that the door remains open in the future for Jamaica to establish our own final court when we have built an economy that can support it financially," the minister added.