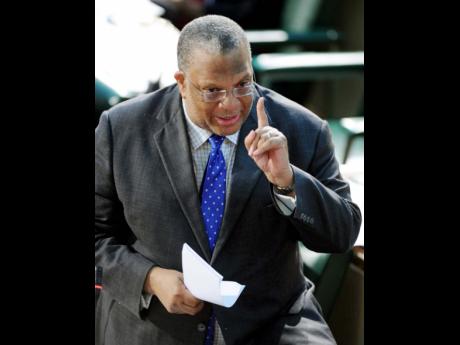 FINANCE AND Planning Minister Dr Peter Phillips has suggested that it is more prudent to call the general election sooner than later, even as he emphasised that its the prerogative of Prime Minister Portia Simpson Miller to do so.

Phillips conceded that the Government would have to improve its communication skills with the populace as it heads into the election.

He maintained that the administration harbours no plans to chop the public sector if the People's National Party (PNP) is successful at the polls.

Speaking in a segment titled 'Call the Finance Minister' on Cliff Hughes Online on Power 106, Phillips said that the outcome of an early election would address uncertainties in the economic environment.

"We still have a generally fragile environment," said Phillips. "There are many issues that we still have to work through."

Constitutionally, the Portia Simpson Miller administration has until April 2017 to call a general election, but the prime minister, supported by Phillips, has set the nation on election alert.

"The only person who can call the election is the prime minister," he stressed, when asked whether elections would be held before yearend.

Uncertainty not good for economy

Phillips suggested that uncertainty in the political domain tends to trigger speculation in the commercial sector, which is not good for the economic environment in which Jamaica is operating.

"The more you will find that people are going to start speculating, hedging their decisions on whether to invest or keep their money in foreign currency rather than local account," he said.

Said Phillips: "It can threaten to derail what is still an important course of economic reform that we have to go through."

He continued: "That is why I think that it is important, and that is what the Private Sector Organisation of Jamaica has also said, that they are not hoping for a long period of (election campaigning), for everybody has a calendar."

Phillips stressed that, unlike the United States, Jamaica cannot afford more than one year of campaigning, especially when we are facing a very difficult situation.

He suggested that much of the gains achieved over the last three years could be lost although the Government has more than a year to call the election.

"If an investor has a billion dollars (US) to invest but says he doesn't know what is going to happen in Jamaica, as is happening now, you have a situation where the fallout could be greater."

Phillips conceded that there is need for more effective communication by the administration in which he serves. He indicated that this might have accounted for the poor showing in recent poll results.

"Don't forget that all of this has been achieved on the basis of great sacrifice that has been made by the Jamaican family," said Phillips.

He, however, lamented that many don't understand what is happening. "It is our responsibility as an administration to communicate it better," said Phillips.

Added Phillips: "We have not been able to create a sufficiently widespread understanding of how the world economy works and how things connect between Jamaica and the wider world."