Prisoner Rehabilitation drive on in earnest 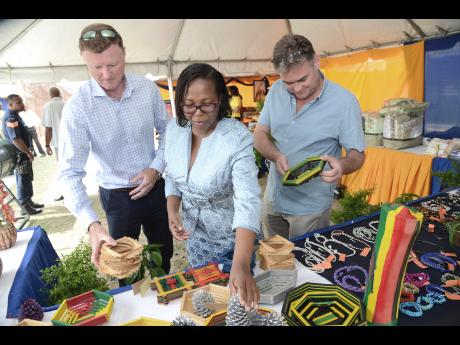 SENIOR OFFICIALS from the Department of Correctional Services (DCS) have indicated that offenders who end up in the country's correctional institutions are already being punished and, as such, the intention is not for them to undergo additional punishment while serving their sentences.

The correctional officers are of the view that every effort must be made to improve the life skills of inmates while they are serving their time in order to reduce the chances of recidivism.

Ina Hunter-Fairweather, commissioner of corrections said the department was proud of its contribution to nation building based on its performance over the years and is excited about plans for the future.

"We have recorded numerous achievements in the rehabilitation of offenders, to include a more diversified programme (such as the) certification in academic and vocational training. Several units have been established and they have all been designed to build staff capacity to improve our operations and to improve correctional management," the DCS head proudly declared.

The benefits of this approach, according to the commissioner, extend well beyond the target individuals.

"We believe that rehabilitation is the best method for treating with offenders and (it engenders) a safer society when they can return as rehabilitated citizens and so ... . We are repositioning for excellence, with the overarching goal of improving systems and processes. This comprehensive strategy, which aims to reduce the rate of re-offending, includes establishing prison industries, strengthening probation after-care services, and modernization of our correctional facilities."

Her comments came at yesterday's opening ceremony for the DCS' 40th anniversary showcase of the handiwork of inmates and wards, under the theme. 'Repositioning for Excellence' at the Horizon Adult Remand Centre, Spanish Town Road, Kingston.

The items on display, made by inmates and wards under the supervision of correctional officers and civilian staff who are experts in cabinet making, interior decorating, farming, welding, upholstering, tailoring and cooking, among others, were very impressive.

Vanna Lawrence, director of rehabilitation pointed out that the wards, as well as inmates, have the option of skills training in at least 30 areas.

Commissioner Hunter-Fairweather, applauded the various stakeholders who work with the Department of Correctional Services to rehabilitate persons in prison.

"As we continue to grow as an organisation, we recognize and express appreciation for the immeasurable contribution of our valued stakeholders, both locally and internationally, who have supported us. We salute those who have served in varying capacities in our department.

"Among our greatest assets are the talents and skills of our staff and I, therefore, commend my staff for their dedication to service and commitment as we strive to achieve excellence in all that we do. We know that our staff members work under adverse conditions, nevertheless we are committed to the cause of rehabilitation, and so, our celebration affords time for reflection," said Hunter-Fairweather.