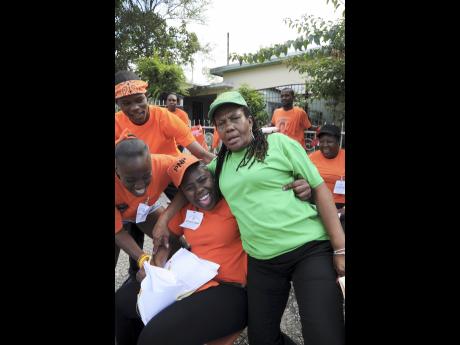 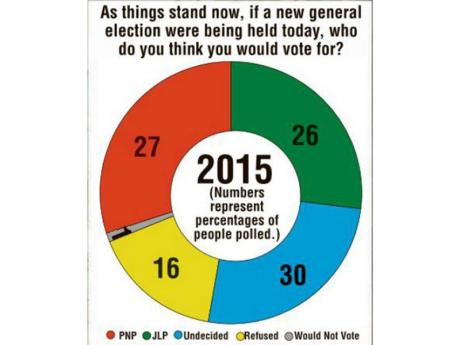 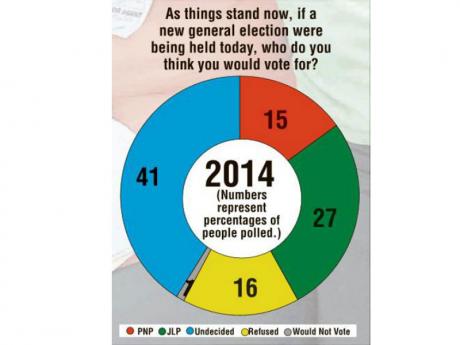 With the country on election watch, the latest Gleaner-commissioned Bill Johnson polls have found the opposition Jamaica Labour Party (JLP) treading water, while the governing People's National Party (PNP) has built a positive momentum that could see it retaining state power.

The PNP's push is being fuelled mainly by people from households that have traditionally supported the party and want to see it re-elected.

In the latest test of the pulse of the nation, Johnson found that the PNP has gained 12 percentage points since the last polls, when Jamaicans were asked which party they would vote for if a general election were called now. The PNP's surge has pushed it ahead of the JLP, albeit by one per cent, which is well within the sampling error of the poll, leaving the parties in a dead heat.

Based on the latest poll, 27 per cent of electors would vote PNP if the general election were called now. This is up from 15 per cent last year.

The JLP, on the other hand, has lost a percentage point since the survey last year, slipping from 27 per cent support to 26 per cent. "Even though it is a statistical dead heat, the PNP has a definite positive momentum and the JLP is treading water," said Johnson.

"I would be feeling very uncomfortable if I were a JLP supporter. I would be having sleepless nights. The JLP has been treading water over the past year, and the perception of the party leader is not good," added Johnson.

In 2011, the PNP went into the election leading the Andrew Holness-led JLP by two percentage points in the opinion polls, and went on to win 42 of the 63 seats in the House of Representatives.

Then, 38 per cent of those polled by Johnson said they would support the PNP in the election, and 36 per cent favoured the JLP.

In 2007, Portia Simpson Miller's PNP slipped in popular standing from 40 per cent in July to 38 per cent in Johnson's last poll conducted days before the election.

The then Bruce Golding-led JLP, on the other hand, had climbed from 31 per cent in July to 42 per cent, and went on to win the election 32-28 in the then 60-seat House of Representatives.

Johnson's latest poll was conducted from September 25-27, 2015, among 1,200 Jamaicans. The poll, which has a sampling error of +3% or -3%, was conducted shortly after the PNP held its 77th annual conference in Kingston.

The poll found that the vast majority of the persons who intend to vote for the PNP - 45 per cent - would do so because of family tradition.

Conversely, family tradition would only lead 23 per cent of Jamaicans to vote for the JLP.

"A year ago, traditional PNP supporters were dissatisfied, but now they are running back to their party," said Johnson.

Dr Lloyd Waller, head of the Department of Government at the University of the West Indies, Mona, agreed that family tradition has long impacted voting patterns in Jamaica.

"From a political-sociological standpoint, very often, children are born into families who may be affiliated to a party. In instances that they are, for the most part, they learn the political values, norms, practices and beliefs of the family," said Waller.

He said there are instances where people have been resocialised by other agents, such as friends and associates in various places, the media or the educational system.

"I have seen, on countless occasions, students at tertiary-level institutions change their philosophy based on literature that they engage, and even lecturers and other students who they interact with.

"In some instances, the family, as an agent of political socialisation, is strong, and thus, the child maintains these beliefs, etc, into adulthood," added Waller.

But Wensworth Skeffery, a deputy general secretary for the PNP, told The Sunday Gleaner that the structure of the party is deeply rooted in groups, which, apart from being the place for political education, provide avenues for socialisation within communities.

"The rich family tradition is embedded in the organisational ethos of the PNP from its inception," said Skeffery, whose introduction to the socialist movement was through family.

He said, however, that the phenomenon is no longer as strong as it was a few decades ago.

"When you canvass, people will say, 'Bwoy, it's just because mi a born PNP or my grandfather will turn inna him grave', ... but there is another group, which - even though they are from a PNP background - focuses on the achievements, plans and objectives of the party," said Skeffery.

Meanwhile, based on Johnson's most recent study, more persons who indicate an intention to vote for the JLP - 22 per cent - say they would do so because they believe it would do a better job than the PNP.

This belief in the ability of the JLP to better handle the affairs of the country is twice as strong as that of the voters who would vote for the PNP for this reason.

JLP General Secretary Dr Horace Chang said a high level of crime, unemployment and underemployment have caused people to be turned off from the PNP.

"Unemployment and underemployment are eating away at the hearts of the social fabric," said Chang. "Our feedback from the field is that the people are going to be voting for the JLP because of these factors," he added.

Chang said the JLP has had a history of being better financial managers than the PNP, and there is a feeling among Jamaicans that it is time for the Andrew Holness-led party to take control of the country.