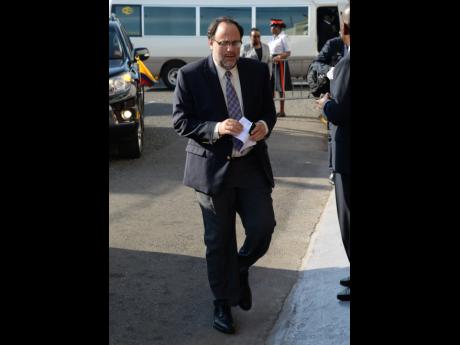 The Jamaican Government remains committed to pursuing the issue of reparation for the historical injustice of African slavery with the United Kingdom, according to Minister of Justice, Mark Golding.

He told The Gleaner it was regrettable that the recent public debate about the proposed prisoner transfer has been mixed up with the reparation discussion, with which it has nothing to do. He said that the Government remains resolute in its position on reparation.

Can't just get over slavery

"The reparation debate and the reparation movement is a movement which we are committed to and which we will pursue over time, through the CARICOM structures that have been put in place for that purpose. We have many Jamaicans living in the United Kingdom, many Jamaicans travel to the United Kingdom every year, and we are not trying to subvert the normal relations that Jamaica has had ... and has enjoyed benefits from since Independence," he noted.

"Having said that, we are committed to bringing to the United Kingdom's attention that we can't just get over slavery, contrary to what Prime Minister (David) Cameron suggested. ... The lingering effects of the past on our people continue and, therefore, this is not a situation that is going to go away.

"It has to be confronted but we want to do so with respect, without undermining the relationship between our two countries, which is mutually beneficial and that is something which we are committed to pursuing," Golding told The Gleaner.

In his address to a joint sitting of the Houses of Parliament during a recent working visit, Cameron urged the region to move on from the legacy of slavery, which he described as "abhorrent" in all forms.

"That the Caribbean has emerged from the long, dark shadow it cast is testament to the resilience and spirit of its people. I acknowledge that these wounds run very deep indeed. But I do hope that, as friends who have gone through so much together since those darkest of times, we can move on from this painful legacy and continue to build for the future," he said.

Opposition Leader Andrew Holness was diplomatic in his comments during the session with Cameron, saying he welcomed the genuine interest of the UK prime minister in advancing the relationship between Jamaica House and 10 Downing Street on trade, investment and security.

But Cameron's address to the Jamaican Houses of Parliament sparked a firestorm of outrage among Jamaicans at home and abroad, with many charging that he was insensitive to the suffering of their ancestors and demanding an apology.

READ: FULL TEXT - PJ slams David Cameron ... Are we not worthy? he asks

According to Patterson, Cameron's "most noble intentions" were jarred by portions of his address to the Parliament in which he asserted that slavery was a long time ago, in the historical past and that "as friends, we can move on together to build for the future."

Prior to Cameron's visit, Mike Henry, member of Parliament for Central Clarendon had called on his parliamentary colleagues to turn their backs on the British Prime Minister if the issue of reparation for the ills of slavery was not on the agenda for discussion.

A staunch proponent of reparation, Henry kept his word and stayed away from this historical parliamentary sitting.