PM: Jamaica will stand with countries that support us 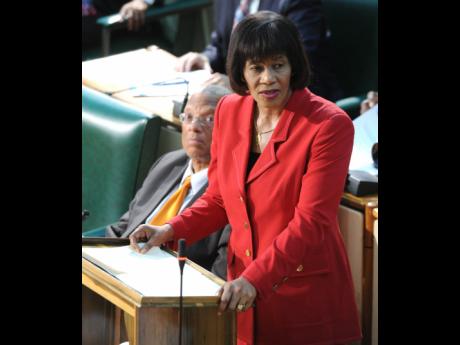 Jamaica's decision on whether it befriends another country appears to be primarily informed by the willingness of that country to provide assistance in time of need.

Prime Minister Portia Simpson Miller, while speaking on a motion for Jamaica to use the floor of the United Nation's General Assembly next week to condemn the decades-old blockade against Cuba by the United States (US), said: "We are friends of all and enemies to none. And we will continue to work with the countries that pay some attention to Jamaica, and from time to time, if we need assistance, will rally with us and give us that assistance."

She added: "It would be careless of Jamaica ... that we would not have a good relationship with a country that is so close to us."

Although Simpson Miller's contribution was on the Cuban motion, her pronouncements about Jamaica's foreign policy follows interesting development in world affairs, chief among them being the move by China to exert influence in the Americas through investments in places like Jamaica.

In April, US President Barack Obama touched down in Jamaica for a short visit en route to the Sixth Summit of the Americas. During that visit, a deal was made for Jamaica to get liquefied natural gas (LNG) from the US.

"We will continue to stand with the countries of the world that stand with us and with our friends," Prime Minister Simpson Miller said.

"For us in Jamaica, we have been very good friends with Cuba, and we benefit a great deal from that relationship," said Simpson Miller.

She noted that Cuba has, among other things, donated four schools to Jamaica - G.C. Foster College as well as JosÈ MartÌ Technical, Garvey Maceo and Anchovy high schools. She also said several Jamaicans have been trained in Cuba in areas such as medicine.

Energy Minister Phillip Paulwell noted that following Obama's visit, Jamaica became the first non-NAFTA ( North American Free Trade Agreement ) country to receive a gas licence from the US administration. He said Jamaica now intends to establish a gas hub in the region and Cuba is interested in getting the gas.

"This is why it is so important for the embargo to be lifted. With Jamaica being as strategically located as we are, and having been the first non-NAFTA country to receive from the US administration a gas licence out of the visit of President Obama, it is important that gas be made available not only to other Caribbean countries but to Cuba as well," Paulwell said.

Cuba and the United States have been moving to restore relations. In July, both countries opened diplomatic missions in each country, upgrading their presence from interest sections to embassies. But the US trade embargo, which requires congress-ional approval to be rescinded, is unlikely to be lifted any time soon.

"I still hope that during the time of President Obama, the embargo will be lifted," opposition Member of Parliament Delroy Chuck said.

Industry Minister Anthony Hylton said although Cuba has been the subject of the embargo, "we should all accept and recognise that in its extra-territorial application of its domestic laws, the United States continues to interfere with the normalisation of trade with not just Cuba, but with the entire Caribbean region.

"Jamaica and the rest of the Caribbean have suffered and suffered significantly with the imposition of the blockade," said Hylton, who had moved the motion.