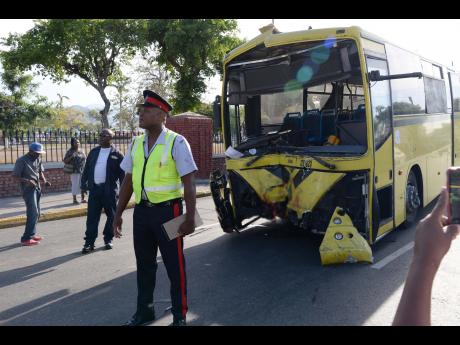 File
A policeman stands in front of a crashed Jamaica Urban Transit Company bus on Orange Street in downtown Kingston on August 10, 2015. One man was killed in the accident.

The managing director of the state-owned bus company, Colin Campbell, admitted on Wednesday that the company was in significant arrears in the payment of claims as a result of awards made by the court.

"As of now, we are in significant arrears with the payment of claims, both negotiated claims and court awards across the company, as well as outstanding legal fees for attorneys who worked for the JUTC over the years," Campbell told members of Parliament's Public Administration and Appropriations Committee.

He said the company has a self-insurance fund, which is normally used to cover the cost of claims; however, it has not been in operation since 2009 as the money was used to secure overdraft facilities at the National Commercial Bank.

"We have only just this month managed to release the funds and to secure the overdraft with other assets, so we are going to rebuild the fund to take care of these commitments," Campbell added.

Committee member Mike Henry indicated that the claimants had a right to seize buses if they were not paid sums awarded by the courts.

"We have tried to negotiate plans so that we don't have that embarrassment of seizures," he said.