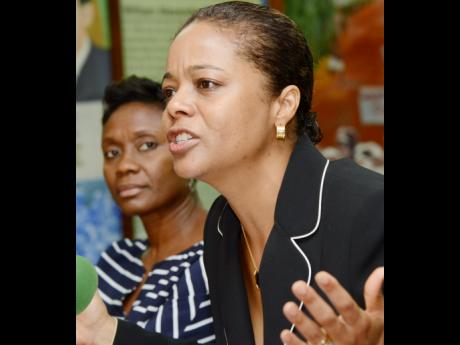 OPPOSITION SENATOR Marlene Malahoo Forte yesterday withstood Senate President Floyd Morris after being instructed to withdraw a controversial comment and was named by the president, but Justice Minister Senator Mark Golding begged for leniency, saving Forte from forthwith suspension from the Senate.

The naming of members who run afoul of parliamentary rules is not a common feature of the cut and thrust of parliamentary interaction in Jamaica's legislature, but yesterday, a defiant Malahoo Forte refused to recant after stating that the current process to establish the Caribbean Court of Justice (CCJ) as the country's final appellate court was "making a mockery of the Constitution".

Malahoo Forte was making her contribution to the debate on three bills to establish the CCJ as Jamaica's final appellate court.

The justice minister had urged her to withdraw the comment.

"To say that what is happening here is making a mockery of the constitutional scheme is disrespectful to the Senate, given that we are proceeding along the lines charted for us by our highest court," he said.

A long debate ensued on Malahoo Forte's comments and the Senate president at first ruled that Malahoo Forte's "behaviour" was contemptuous of the Senate. However, he instructed her to continue her presentation.

The sitting was suspended for dialogue with the leaders of government and opposition business, but when the sitting resumed, the Senate president named Malahoo Forte and asked Senator Golding, a minister of Government, to move a motion for the suspension of the errant senator.

Golding rose to his feet, saying the debate had taken a "sad turn", noting that Senator Malahoo Forte had been contemptuous of the president's ruling, which constituted a clear violation of the Standing Orders.

However, Golding indicated that to suspend the Senator could effectively derail debate on these important pieces of legislation.

He urged Morris to be "lenient in this instance" and to revert to his earlier decision.

Responding, the Senate president instructed the senator to complete her contribution to the debate, but cautioned: "I want no one, whether it be in the Senate or elsewhere, to think that I am a 'softers' (soft person), but I am acting in the national interest and in the interest of the debate."

Malahoo Forte then made her position clear that any move to establish the CCJ as Jamaica's final court must go to the people of Jamaica in a referendum, a position taken by the opposition Jamaica Labour Party.

For the three bills to receive passage in the Upper House, one member of the Opposition in the Senate would have to vote with government senators to achieve the two-thirds majority required by law.

The bills have already received the green light from the House of Representatives, where the ruling People's National Party administration used its majority to push through the bills.