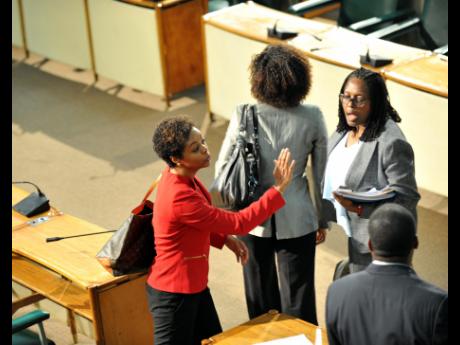 Norman Grindley
Senator Marlene Malahoo Forte (left) reacts after she was suspended from the Senate on Friday. Government Senators Imani Duncan-Price (back turned) and Angela Brown Burke have co-signed a statement calling on Malahoo Forte to respect the Senate.

THE JAMAICA Labour Party's Area Council One yesterday approved a resolution for all eight opposition senators to cease participation in any further debates on the three Caribbean Court of Justice (CCJ) bills until they receive an apology from the president of the Senate and government senators regarding the suspension of Marlene Malahoo Forte from the Senate.

Senator Malahoo Forte was suspended on Friday after she was found by President Floyd Morris to be in contempt and showing disregard for the authority of the chair.

Morris twice summoned Malahoo Forte to return from the lunch room to the chamber on Friday so she could produce him with a copy of a letter she read into the records of the Senate indicating the Privy Council's willingness to travel to Jamaica to hear cases.

But instead of returning forthwith, Malahoo Forte sent a message to Morris, through the marshal who was sent to get her, that he should adjourn the Senate and that she would furnish him with the letter at another point.

However, the female senators on the government benches have called on Malahoo Forte to respect the Senate and said that the insertion of the gender card is "a deliberate attempt to muddy the water and deflect from the real issue, which is Senator Malahoo Forte's blatant disrespect for the president of the Senate and the Senate".

"It is our considered opinion that rather than trying to deflect, condemnation should be placed at the feet of Senator Malahoo Forte, who has on several occasions shown scant regard for the President of the Senate, as evidenced in her behaviour on Thursday and Friday," said a release co-signed by senators Sandrea Falconer, Angela Brown Burke, Imani Duncan-Price, and Sophia Frazer-Binns.

We, the female members of the Senate on the Government side, totally condemn the despicable and unwarranted attacks by the Opposition on the character of the Leader of Government Business, Senator the Honourable A.J. Nicholson.

The attacks are grounded on a tissue of lies to cover up the contemptuous and disrespectful conduct of Senator Marlene Malahoo Forte towards the president of the Senate.

The truthfulness of the marshal of the Parliament (a retired soldier) must never be doubted. He reported that the two occasions on which he was sent by the president to Senator Malahoo Forte last Friday to ask her to return to the chamber, he found her in the dining room. This was after her bag had been retrieved from the chamber by Senator Kamina Johnson-Smith.

How else would the marshal have been able to return to the president on both occasions with messages from the senator? Surely, that would not be not possible if the senator was in the ladies' room, as she and her fellow party leaders have stated in the public domain.

The marshal is an independent civil servant with no axe to grind. He has no need to concoct a story to cover up the indefensible.

We have known our leader of government business and minister of foreign affairs and foreign trade to care deeply about the welfare of our women, and he is also a stickler for appropriate behaviour. Indeed, we have all witnessed how he can be moved to heartfelt apology where he has erred. We are of the view that, in this case, he has not erred in his judgement or actions.

The female government senators stand in full support of our leader of government business. We believe the insertion of the gender card is a deliberate attempt to muddy the water and deflect from the real issue, which is Senator Malahoo Forte's blatant disrespect for the president of the Senate and the Senate.

In reviewing all that transpired, we see no basis on which the Opposition can truthfully accuse Minster Nicholson of being unfair, disrespectful, or showing scant regard for females.

In fact, it is our considered opinion that, rather than trying to deflect, condemnation should be placed at the feet of Senator Malahoo Forte, who has on several occasions shown scant regard for the president of the Senate, as evidenced in her behaviour on Thursday and Friday.

We condemn this kind of disrespect for our senate president, who has overcome much and has been elevated to a position of leadership in our country.

Indeed, we also condemn the malicious attempt to besmirch Minister Nicholson's reputation and deliberately confuse the public with lies and changing stories. This is unbecoming of political leaders of our great nation, and we call on everyone to act responsibly in alignment with our role as servants of the people of Jamaica.

On Thursday, October 22, 2015, Senator Malahoo Forte, in her presentation on the CCJ, read into the records of the Senate, a letter which she claimed confirms the willingness of the Privy Council to sit in Jamaica. This letter was allegedly addressed to the then Honorable Minister of Justice.

The Minister of Justice, Senator, the Honourable Mark Golding, informed the Senate that the ministry, after an exhaustive search, was unable to locate any such letter in its registry. Both the president and Senator Golding requested a copy of the letter, and the president further directed Senator Malahoo Forte to provide the Senate with a copy. She left the sitting on Thursday without submitting the letter to the Senate.

On Friday, October 23, 2015, at the start of the sitting, the president again instructed that the letter be provided to the Senate. Senator, the Honorable Minister Mark Golding then indicated that he had also emailed Senator Malahoo Forte the evening before reminding her to furnish the Senate with a copy of the letter purportedly from the Privy Council and addressed to the office of the minister of justice.

The minister once again asked the president to use his good offices to secure the letter in question. It was, therefore, very curious that Senator Malahoo Forte told the president that she was unable to locate the letter, which must be among her papers. The president repeated his directive that the letter be provided to the Senate that day.

As the Senate was nearing adjournment, the president again asked the marshal to request that the senator returns to the chamber. On his return, he said Senator Malahoo Forte had responded that the president could proceed to adjourn the sitting as she had already given her undertaking to provide the letter.

It must be noted that, on the two occasions, she was still in the dining room area and not in the restroom as is being alleged.

In accordance with the rules of the Standing Orders, the president proceeded to name the senator, and the motion was moved and carried for the senator to be suspended until the letter is provided to the Senate.

It is interesting to note that Senator Malahoo Forte returned to the chamber before the president departed and made no effort to present the letter or engage him in any way.