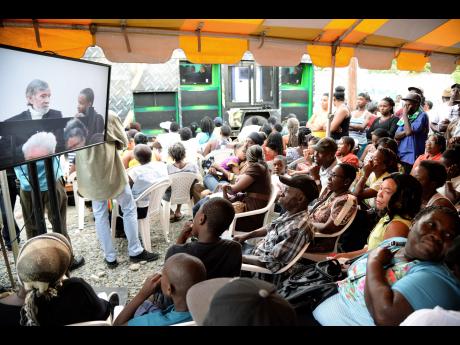 Jermaine Barnaby
A section of the large crowd that turned out to witness the re-enactment of the trial of Governor John Eyre. 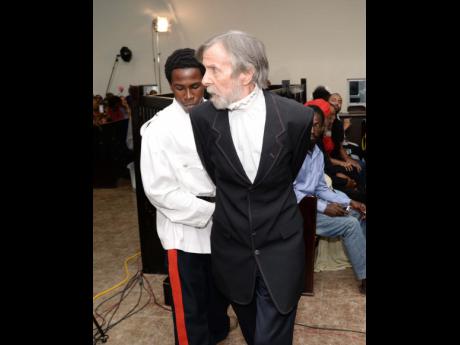 Jermaine Barnaby
A re-enactment of the trial of Governor Eyre at the St Thomas Courthouse in Morant Bay, St Thomas, on Sunday, October 25. Governor John Eyre is being dragged off to jail after being found guilty in the Morant Bay Resident Magistrate’s Court yesterday.
1
2

In a two-hour-long enactment of the trial, including a less-than-five-minute jury deliberation, Eyre was lifted from the pages of the history books and dragged to the Morant Bay Resident Magistrate's Court to be tried by the people for the hangings which he ordered in response to the Morant Bay Uprising, led by Paul Bogle.

Bogle and his friend, George William Gordon, were hanged on October 24 and 25, respectively.

Yesterday, Eyre, described as a wilful, stiff, austere, puritanical son of a Yorkshire clergyman, took responsibility for hanging George William Gordon, who, he claimed, was responsible for the uprising. He was a bitter enemy of Gordon.

A Royal Commission found that Gordon was "illegally tried and wantonly hanged". Governor Eyre was recalled to England, where he was prosecuted before a grand jury, but was acquitted. In 1872, he was refunded the cost of his defence by the English government, and in 1901 he died.

Eyre was resurrected by attorney-at-law Bert Samuels and others who felt that justice was not served when he was acquitted and not tried for the deaths of the other martyrs. So Samuels wrote The Trial of Governor Edward John Eyre on behalf of the National Commission on Reparations, so that justice could, in fact, be served.

In a production directed by Michael Holgate, six witnesses took the stand to recount the atrocities of 1865.

Eyre, played by Bob Kerr, was defended by attorney-at-law Carlisle (Able-Don Foote), but also spoke in his own defence, declaring his innocence.

He rejected responsibility for the deaths of the four people, in the process referring to Paul Bogle as a ringleader and troublemaker. "In my role as governor of this island, I took the steps necessary for the protection of the colony," Eyre said, making reference to the martial law that he declared.

In summing up, prosecutor John Gorrie (Peter Abrikian) said, among other things, to the jury, "The declaration of martial law against the people was premature, brutal, and unwarranted ... . This indecent haste, where people lost their lives, must be corrected by you in your verdict."

In comparing the trial to the court martial, Eyre's attorney declared, "This trial is unfair. It's an unfair process ... and if you are fair, send a message of justice, a verdict of not guilty."

It was a message of justice, from the perspective of the people, that the jury sent when the foreman, played by Dennis Brown, found Governor Eyre guilty on all four counts. He was then led reluctantly from the docks, a dejected man, back into the annals of Jamaican history.

In speaking with The Gleaner after the trial, scriptwriter Bert Samuels said: "It was more than fair. The judge tried to protect Eyre, but the evidence was overwhelming. I tried to achieve closure on the part of the St Thomas people ... . This guilty verdict means closure for them."