JDF officer: I was not told of police killings in Tivoli 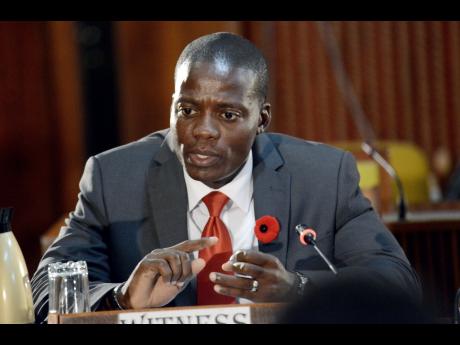 Rudolph Brown
Major Luis Cheverria of the Jamaica Defence Force testifies at the West Kingston commission of enquiry at the Jamaica Conference Centre in Kingston yesterday.

A SENIOR Jamaica Defence Force (JDF) officer has testified that none of the men and women under his command reported to him that they saw police personnel kill unarmed civilians during the May 2010 operations in Tivoli Gardens.

That assertion by Major Luis Cheverria before the West Kingston commission of enquiry yesterday stands in contrast to the accounts of two JDF soldiers who said they saw masked policemen kill as many as five unarmed young men in Tivoli Gardens.

The two soldiers, identified only as Soldier One and Soldier Three, had their voices distorted when they testified before the commission last month from an undisclosed location that they witnessed the killings near the intersection of Dee Cee and Change avenues, and in the Java section of the west Kingston community, and that they reported what they saw "up the chain of command" as they are required to do.

While acknowledging that his area of responsibility included Dee Cee and Change avenues, as well as sections of the Java area, Cheverria insisted that this was never brought to his attention.

"Were you made aware, while you were in Tivoli, of any actions, murders committed by members of the police force against citizens?" attorney for the Jamaica Constabulary Force, Deborah Martin questioned during cross-examination.

"No, Counsel, no such report was made to me," Cheverria replied.

Seeking to explore the major's assertion, attorneys for the Office of the Public Defender (OPD) asked chairman of the commission, Sir David Simmons, to have Soldier One and Soldier Three's names disclosed to him "for him to say if they were under his command during the operation."

"We have to try and get to the bottom of this," said OPD attorney Lord Anthony Gifford as he sought to encourage Simmons to accede to his request.

While not objecting to the application, attorney-at-law Linton Gordon, who is representing the JDF, cautioned that the two soldiers gave evidence after "certain undertakings" were given, a reference to the confidentiality attached to their testimony.

But Gifford went further, requesting that Simmons ask the military to explain how they treated the allegations of extrajudicial killings made by Soldier One and Soldier Three, given their testimony that they detailed what they saw in a statement given to the JDF legal office shortly after the operation in 2010.

Gordon, in his response, not only directed Gifford to the Independent Commission of Investigations (INDECOM), but raised concerns about how the statements came before the commission, asserting that they were handed over to INDECOM, which was probing the deaths of civilians during the operations.