Red herring letter causes a stink from Jamaica to Britain 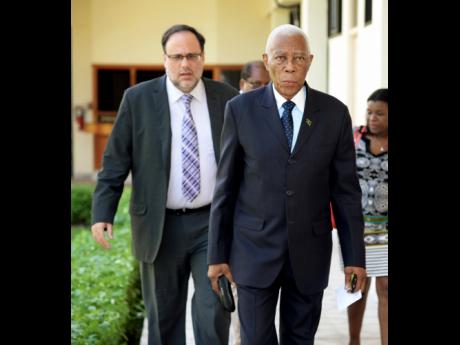 JUSTICE MINISTER Senator Mark Golding has argued that embattled Opposition Senator Marlene Malahoo Forte failed to divulge in the Senate that the arrangements that led to the letter, purportedly written by the Privy Council, was facilitated by a law firm which has a strong financial interest in Jamaica's continued relationship with the United Kingdom (UK)-based final court.

The letter was said to have been written five years ago to Dorothy Lightbourne, then minister of justice.

Malahoo Forte read from the letter in the Senate on Thursday, stating that the Privy Council had indicated a willingness to travel to Jamaica in order to hear appeals from locals.

At a Jamaica House media briefing yesterday, the justice minister divulged that the arrangements that led to the Privy Council's offer were facilitated by a law firm in London that represents the Government of Jamaica in Privy Council appeals.

"That law firm clearly has a strong financial interest in continuing current arrangements for Jamaica where we have to engage solicitors in London as Privy Council agents to brief counsel and file papers for matters that are heard in London," Golding told journalists.

According to Golding, the law firm has earned fees of some $207 million over the last five and a half years for providing UK Privy Council appeal services to the Jamaican Government.

Golding pointed out that the Privy Council has never sat in Jamaica after being the country's final court for some 200 years.

He questioned why the then Jamaica Labour Party administration did not act on the letter received from the Privy Council. "Why was this offer not taken up? What were the costs that would have been incurred if the offer was taken up?" Golding queried, concluding that the whole matter was "perplexing".

"This letter is a red herring, and this letter is Jamaica's Lettergate," Golding charged, adding that Malahoo Forte should produce the document without further delay.

The justice minister contended that it was appropriate that Malahoo Forte be suspended until she produced the letter to Senate President Floyd Morris. She was suspended on Friday by Morris, who said that she was contemptuous.

Continuing, Golding said the letter read to the Senate on Thursday was seemingly an official letter from the Privy Council to the then justice minister.

"Forte's evasive conduct over two consecutive days of sittings (Thursday and Friday), and failing to produce the letter as indicated, and as the president directed that she should, is problematic," he said.

"It evidences a lack of respect for the Senate and the president of the Senate and his rulings, but also problematic because, as minister, I am anxious to see what the letter says," he said.

Golding said the Privy Council is not an itinerant court and was not set up to sit outside the UK.

He said occasionally, the court sits outside of the UK, citing the Mauritius and The Bahamas, which he described as ad hoc arrangements set up to hear particular matters and not to dispose of the entire list of cases before these countries.

THE PAYMENTS TO LAW FIRM FOR:

Excluded from the above are unpaid bills totalling $5.2 million for ODPP and $1.7 million for AGC.